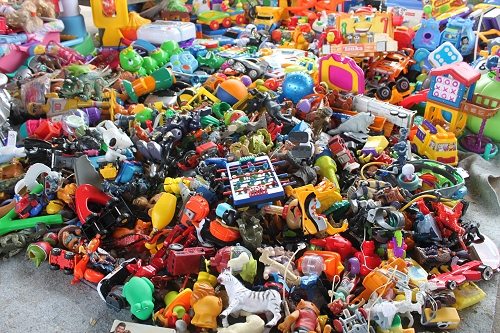 "The sheer quantity of toys in a home can, in their abundance, devalue the intrinsic value of each individual toy in the eyes of the child and their parents."

Good Housekeeping writer, Amanda Garrity, appears to be extremely self-satisfied. At least that is the way it seems based upon her headline: "Kids Are Actually Happier With Fewer Toys, Science Says WE ARE VINDICATED!"

It is not clear what "they" said or who "they" are but it appear that whomever "they" are "they" like the notion that children should have fewer toys. And why are they feeling so vindicated? Its because of a study published in Science Digest entitled "The Influence of the Number of Toys in the environment on toddlers' play."

I feel a great deal of ambivalence about this research. On one hand, I like you, have walked into many a playroom only to be astounded by the sheer number of toys littering the floor and overflowing from shelves and containers. It just feels like too much for any child to focus on, much less fully appreciate and enjoy any one toy. That's why the study feels right. Here is how Ms. Garrity describes the study's conclusion:

Researchers found that when the toddlers were in the room with fewer toys, they were actively engaged for a longer period of time. Because there were less toys to choose from, the children used their creative instincts and explored different ways to use the same toy, further developing their cognitive skills.

On the other hand, my problem with studies like these is that they don't seem to have enough children to make such a confident statement. The Good Housekeeping article states: "Researchers tested 36 toddlers between the ages 18-30 months for 30 minutes in two different playrooms: the first had four toys and the second had 16 toys."

36 participants for 30 minutes does not seem remotely enough children. Any of us who have done focus groups have been amazed by how different children are based upon where they are from, what socio-economic group they come from, etc. I would have preferred that there be a number of groups in different parts of the country.

I do think, however, that there is something here for all of us in the industry, and those who buy our toys to contemplate: Are we too focused on the convergence of lowest price / lowest quality and not enough on highest price / highest quality?

In central Europe (France and Germany) parents are offered and do purchase fewer but more expensive, quality toys (what I call "Legacy Toys") that are perceived as an investment. They are designed to last so that they can scale up with the child and then be passed down sibling to sibling and generation to generation.

In the U.S., parents are offered and do purchase more, but less expensive and largely plastic toys that end up in a landfill (hence my term for them: "Landfill Toys"). These are toys that last a relatively short amount of time and quickly get thrown out.

The sheer quantity of toys in a home can, in their abundance, devalue the intrinsic value of each individual toy in the eyes of the child and their parents. Are we, as such, sending the wrong message through our concentration on lowest price rather than durability, scalability and multi-generational engagement and enjoyment.

Might we not do ourselves and the parents and children who consume our toys a service by helping them better appreciate the intrinsic value of a great toy in its ability to sustain interest and nurture physical, emotional and mental growth? Do we, in essence, undervalue what we produce by training parents to look for price instead of long-term value?

I think its something for us to contemplate. What do you think?