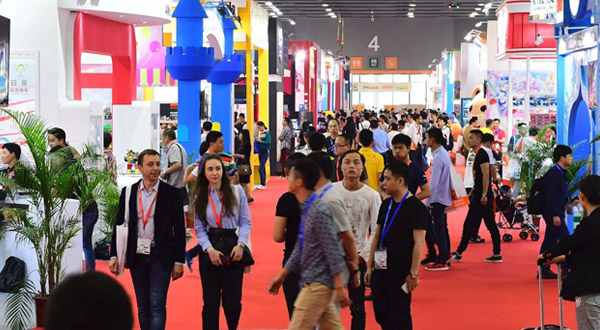 If you are a Westerner, have you ever attended the Guangzhou International Toy & Hobby Fair? I didn’t think so. This was my first time and I have to say that I was extremely impressed by the quality of the exhibits, the variety of product and the large crowds of attendees. The show was busy and filled with energy.

This is an important show for the Chinese domestic market but it takes place in the heart of the Pearl River Delta, home to the Chinese toy manufacturing industry. 86 percent of the world’s toys are made in China and 70 percent of that 86 percent come out of this area.

This is significant because those who exhibit at this show are, to the large part, not trading companies but those who actually make the toys. As a result, it is possible to connect directly with the producer rather than having to go through a middleman. It is also a convenient place for Westerners to visit because the factories are close to the fair grounds here in Guangzhou and only a two-hour train ride from Hong Kong.

A plus for Westerners whose products are exhibited here is to get a chance to see how Chinese buyers respond to their play patterns and packaging. It is, in that sense, like one giant focus group in which toy executives can get real time responses. In many cases they may well be surprised.

For example, one of the speakers at the Toy Talks forum, which took place during the show, was Kirsten Ytterbo of King Bee Toys. Kirsten is from Ohio but has been working in China for the last ten years. She spoke about one of her experiences, which I found to be very telling. It seems that she was considering carrying a product whose package showed a boy in a green hat. That sounds innocuous enough but she learned that a green hat in China has a very specific meaning. It is the sign of a man who has been cuckolded. Needless-to-say, the boy in the green hat did not make the cut.

As China grows as a dominating domestic toy market and the toy industry recovers from the Toys R Us bankruptcy, it is going to be important for western companies to enter the Chinese retail market. In my opinion, Guangzhou is a great place to start.