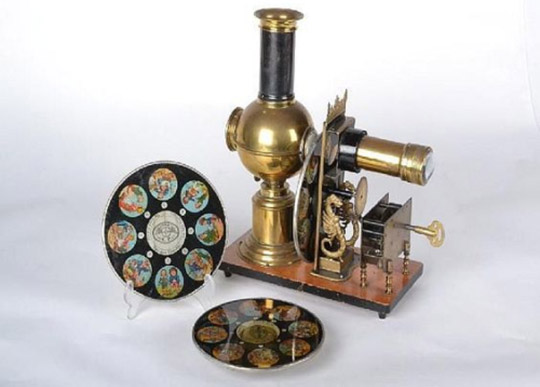 That which is cutting edge technology eventually becomes a toy. In the case of the Magic Lantern, it took about 250 years. The Magic Lantern was invented in the early 1600's and by the mid-1800's had moved from using limelight (heated limestone that gave birth to the term "in the limelight") to slightly safer kerosene. I can't imagine a parent letting a child light up some kerosene today but in the 19th and early 20th centuries that was deemed safe enough.

Magic Lanterns used the light source to illuminate pictures on a wall. The heat source was inside a type of small oven with a small stove pipe which allowed the heat to exit. It was really pretty ingenious.The Magic Lantern was the parent of the slide projector and possibly the godparents of the cinema.

The above image shows a key wound version that allowed the images to move in front of the light source. Its a bit of a precursor to the movie reel. Here are some other images that I thought you would enjoy:

Magic Lanterns came in various formats. The above slide reel worked with a wheel type contraption. It looks like this particular set combined a travelogue with classic history. 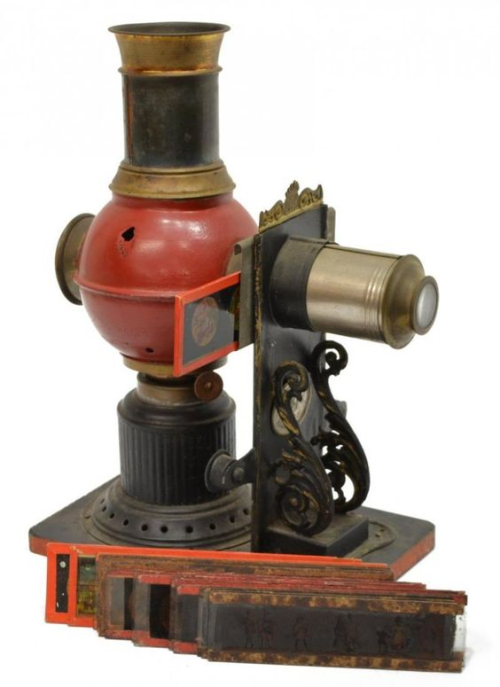 The above is an Ernst Plank Magic Lantern with an appealing shape and color. It must have been intensely red when it was new. The above version used strips rather than a wheel.
On the next page is an image of a box cover for a French Lantern Magique. Below is the clever use of a house with a chimney to house the mechanism.