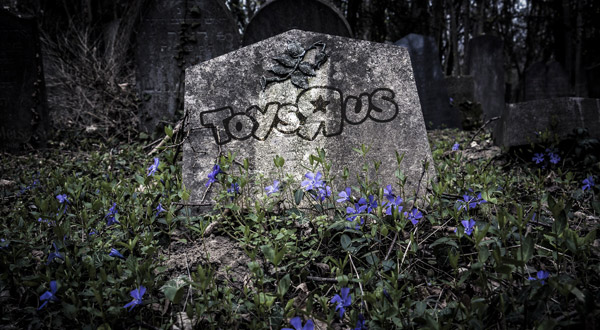 "Toys R Us, the iconic U.S. retailer, is in the process of drafting the court motion for its liquidation plan, a source familiar with the situation told CNBC on Tuesday.The retailer could file as soon as the end of Wednesday…"

"Toys R Us Prepares Plan to Liquidate Its Business"

Major media outlets are reporting that Toys "R" Us is close to an announcement that they are closing  all US stores. The company has reportedly ceased paying its bills and accepting gift certificates.

The Toys "R" Us we knew (or thought we knew) is not coming back. As I write this, I remember my early impressions of the company from the 1980's and 90's when it was a robust, muscular organization, extremely confident, sometimes arrogant but always willing to take chances on new brands and new products.

That Toys "R" Us sustained a toy industry middle class made up of small companies run by multi-generational families. When a toy company came out with a new product, no matter how small the company, they knew they could find a home at Toys "R" Us.

The company was the creation of the the entrepreneurial Charles Lazurus who grew it into a retail and toy industry behemoth.  Lazarus steered the chain through both fair and foul weather and finally retired in 1994. The company has never been the same.

New management decided that the best way to compete with Walmart and other discounters was to be like them. Once dedicated to being "the world's greatest toy store" the company cut back on the variety of its products and as a result truncated its vision. What was once a great toy store was now more of a larger version of Walmart's toy department. This was bad for consumers, bad for mid-sized toy companies and ultimately bad for Toys "R" Us.

Some very talented, dedicated people, some having worked at the company for decades, are going to lose their jobs. In addition, a great number of sales representatives whose families have serviced the chain for generations are also going to feel the impact. Some smart toy companies and retailers will employ them but many will move on to either retirement or other lines of work.

What companies are going to replace Toys "R" Us? What forms will they take? Who will lead them? What will the toy industry landscape look like in five years? That is the next chapter and we are about to see it written.