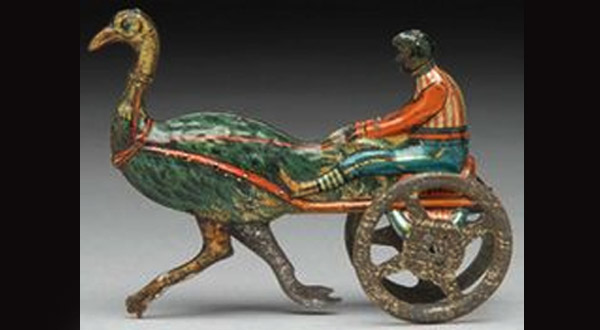 I am on my way to Nuremberg Germany for the Spielwarenmesse toy show arguably the world's largest toy show, at least in terms of acreage. 17 buildings cover a lot of space and wear out a lot of shoe leather.

Germany is historically the toy industry's founding country.  It was in Germany that the industrial revolution moved the world from hand made toys to mass produced manufactured ones. As a result, It was, in the decade prior to World War I, much like China is today, the manufacturing center for the world's toys.

I decided to take a look at the toys that Germany was turning out in 1910. To my surprise and delight, I found that many of the toys were wonderfully whimsical to to point of being a little bizarre.  Note the wonderful Ostrich Cart, shown above, by the Meier company that sold for a penny in 1910.

The below grasshopper with rider also dates back to the same period. It, like the ostrich, is rather bizarre and must have mystified and delighted children. 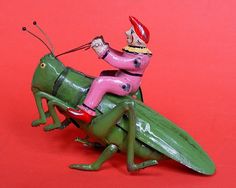 In the image below, a rather haughty man is riding a very well dressed pig. Frankly, I am really not sure what is going on in the picture shown below, but it looks like a dog is pushing a Monkey around in a beautiful cart (note the monkey motif played out on the wheels). What do you think today's children would think of these toys?