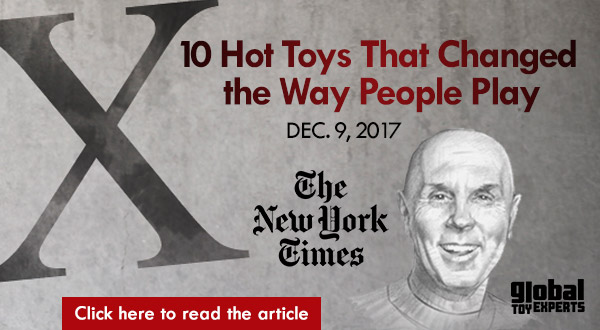 New York Times reporter, Zach Wichter, asked me to provide him with my list of the top 10 toys of the last few decades. I did so and the result was his article: "10 Hot Toys That Changed the Way People Play" which appeared in this Sunday's New York Times.

In preparing my list I decided to list only hot toys that had staying power beyond their initial burst of notoriety.  I also needed to decide on a start date so I went back 35 years. Finally, I ranked them in order based upon how big a impact they had on society, culture and the economy.
Read the article and let me know what you think I should have included or left out.
Here is Zach's article:
The Fingerling Monkey may be this year’s hottest toy, but its popularity is far from unparalleled. A new must-have toy seems to arrive every holiday season. Richard Gottlieb, the chief executive of Global Toy Experts and publisher of Global Toy News, discussed some of the Fingerling’s craze-making predecessors over the last generation.

Popular toys are often like comets across the sky, drawing attention quickly and fading just as fast. “A good fad is about eight months from explosion to collapse,” Mr. Gottlieb said. While few toys outlast the initial hype, the ones he listed have endured as cherished memories from childhood and helped shape play time expectations long after they left the shelves.

They were also big business. Mr. Gottlieb ranked the toys below based on the impact each had on the industry, indicating when they became major hits in the United States. “These products,’’ Mr. Gottlieb said, “became cultural touchstones.”