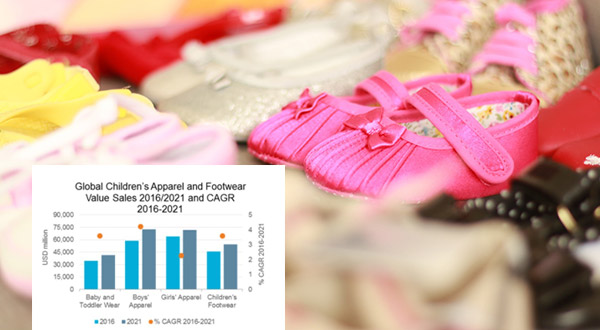 As explored in Euromonitor International’s “Global Licensing Trends in Children's Apparel and Footwear” report, characters dominate children's fashion licensing as the majority of these franchises target children. After children pass the age of eight, other licensing types provide fiercer competition to character licensing including fashion, music, celebrity and sports. Outerwear is the largest licensed childrenswear category while nightwear and underwear continue to be strong. As design/fashion become more important, partnerships between character licensors and designer brands respected by adults are increasingly being experimented on. 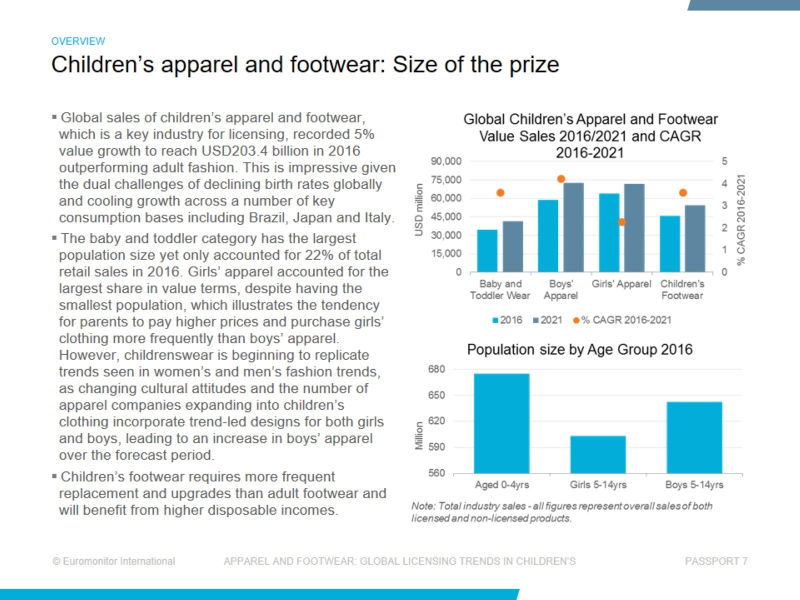 Global sales of children's apparel and footwear recorded 5% value growth to reach USD203.4 billion in 2016* outperforming adult fashion. This is impressive given the challenges of declining birth rates globally and cooling growth across key consumption bases. India is forecast to be the star of the industry in terms of growth.

Character licensing is crucial in childrenswear since most characters target children. Yet, the category also features adult-targeted classic characters whose appeal benefits from a nostalgia factor and even some child-orientated franchises are marketed secondarily to adults by creating a "cool" factor around them. Characters will continue to dominate for the foreseeable future with Disney in top spot. Despite the emergence of social media and apps, film and TV will remain dominant and the interest in characters will be driven largely by big sequels and franchises.

Fashion, music, celebrity and sports are among other licensing types

After children pass the age of eight, other licensing types provide a fiercer competition to character licensing. Children's fashion i s actively targeted by sports licensing as businesses are very eager to expand business beyond adults. The popularity of fashion licensing goes hand in hand with the so-called "mini-me" trend, where parents and children dress the same, completing children's apparel and footwear's evolution from comfort dressing to a more fashion/adult looking proposition. Concert merchandise is a big business that also attracts a large number of tweens.

The size of the child population is a major determinant of potential especially character-based licensed product sales globally. More than 80% of the world's children aged 0-14 years are located in Asia Pacific or the Middle East and Africa, where countries tend to have the highest child population growth. Between 2016 and 2030, the 0-14 years population is projected to increase by almost 137 million in the Middle East and Africa, the fastest growth globally.

Outerwear is largest, while nightwear and underwear continue to be strong

In children's outerwear, jackets and coats is less penetrated by licences which could offer further opportunities. In children's nightwear, licensed character nightwear is  fairly evenly split between boys and girls unlike adults where products aimed at women are more popular. Children who are embarrassed to wear characters as outerwear can still wear them as nightwear or underwear even when they are older.

Tweens: A powerful consumer group in their own right

The internet and social media has spawned a new generation of brand-savvy children. As they tend to move away from traditional "age-appropriate" styles and designs, the growing consumption power of tweens presents opportunities particularly around sports, music and celebrity licensing. Character franchises could also turn this to an opportunity if they go for more sleek, mature designs emphasizing the "cool" factor.

While characters target mainly young children, babies should not be overlooked. They may not be able to express their opinions explicitly on their character choices, their parents, older relatives and gift-givers speak on their behalf. Nostalgia plays a greater role in here as more often than not they opt for their favorite characters from their own childhood opting for more "soft" characters.

The global 3-8 year-old population is forecast to increase by 38,663 million over 2016 and 2025 creating an expanding consumer base. Story-telling is a key part of character licensing which should be leveraged fully while competition from locally-grown franchises should be taken into account when determining a strategy. The rising popularity of organic/ethically-made products as well as private label offers good opportunities for licensing.