On November 9, 2017, Wiffle Ball took its place of honor in the National Toy Hall of Fame, joining 64 other classic toys and games. Introduced in 1953, the Wiffle Ball represents the optimism of the postwar era and the romanticism of life in the suburbs. Part of the Wiffle Ball’s charm is that it remains relatively unchanged since its introduction. The orange, black, and white Wiffle Ball box today features nearly the same typeface and instructions on how to throw the ball as it did originally; on occasion the box depicted a celebrity such as Thurman Munson, Catfish Hunter, or Paul Winchell and Jerry Mahoney. The game rules and dimensions for the field of play prove simple enough for players to make it their own. And play with a Wiffle Ball grants the pitcher with the magic of illusion thanks to its founder’s perseverance. 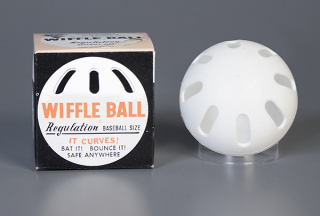 It all began in Fairfield, Connecticut in 1952 when David Nelson Mullany watched his 12-year-old son and a friend play a pick-up game with a perforated plastic golf ball and a broomstick. Based on the kids’ creative adaptation of baseball, Mullany decided that postwar American suburbia did not have “enough room for two teams, enough space for a field,” and neighborhood baseball games led to “too many broken windows.” Mullany batted around a few ideas and he began to cut holes in ball-shaped plastic containers he commandeered from a nearby cosmetics manufacturer, with his son stepping up to the plate to test the designs. As a retired semi-pro baseball pitcher, Mullany also wanted a design that made it easier for his son to throw curve balls. Through trial and error, the Mullanys determined that a ball with eight oblong slots cut into one hemisphere worked best at grabbing the air and diverting the ball’s trajectory. The pitcher could easily throw a curve, a slider, or a knuckle ball. Players used a thin purpose-built bat, which further advantaged the pitcher by handicapping the batter. Their version of the revised game produced a good number of strike-outs, called “whiffs” in the Mullany’s neighborhood. Having focus grouped his product, Mullany introduced a whole new ball game when he began to sell the balls for 49 cents each from the back of a station wagon and at a local diner. When Mullany supplied local stores with the ball in 1953, he removed the “h” and trademarked the name “Wiffle.” Mullany’s design slowed the pick-up game and shrunk its field. Minimizing the effects of size and skill, his goofy orb evened the contest and had a big impact on neighborhood play. Mullany broaden his reach in 1954 when he hired a marketing agent based in New York. Wiffle Balls hit the market on Canal Street in Lower Manhattan and the company struck a deal with Woolworth stores. The Wiffle Ball proved sufficiently successful that, in the following decades, the company has only produced one major marketing campaign—in the 1960s, New York Yankee Whitey Ford endorsed the Wiffle Ball in a short film about how to throw the ball. The Wiffle Ball Corporation soon set-up shop in a small, two-story brick factory in Shelton, Connecticut, and managed to cultivate the all-American pastime with its product. The Wiffle Ball Corporation insists that, when it comes to their signature product, they do not “know exactly why it works—it just does.” For more than 60 years, generations of kids have started their baseball careers swinging at a Wiffle Ball, demonstrating precisely the type of longevity and iconic status that has earned it entry into the National Toy Hall of Fame.