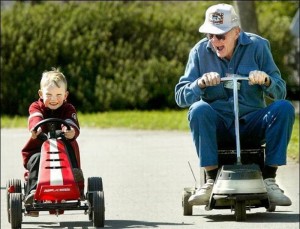 Most of us enjoyed playground games (sometimes called Street Games) when we were kids. Hop Scotch was a big one in my neighborhood as were 7 Up, Dodge Ball, Tag, Red Light / Green Light, Hide and Go Seek, Kick the Can and so many more.

What if we were to decide that we don't need to abandon outdoor games when we turn 10?

What if we were to continue to play them into advanced age?

What would that do for our physical and mental health?

We are about to find out because that is what is happening in New York City at Asphalt Green, a non-profit  community center on Manhattan's upper east side. I learned about it in an interesting  article by New York Times writer Alyson Krueger: "New Workout for Seniors". According to Krueger, while visiting the community center she saw people in their 80's playing Dodge Ball, Tag, Popcorn and other playground games in an attempt to be more active and confident. From the sounds of it, the seniors are also regaining some of their youth, both in agility and confidence.

Here is a quote from the article that gives the flavor of what is happening:

There was a lot of whooping and hollering as a group of exuberant students gathered for recess time at Asphalt Green on the Upper East Side. They were playing a game called “popcorn.”

“Listen up everyone,” yelled one of the instructors, Zack Cruz, to quiet the noise. “We are going to throw the ball in the air, clap one time, catch it, and then pass it to your neighbor. Everyone ready to go? Say yes!”

One student crouched down. “We can do this,” she said.

But the student was not 8; she was probably in her 80s. Most of the popcorn players that day were retirement age, or older.

I find this to be a thought provoking exercise as it reminds those of us in the business of play that the act of playing games from our youth can bring back the carefree joy that came from losing ourselves in play and forgetting to be self-conscious.

Perhaps we should be looking at some of the active games we design and think how an older adult might enjoy them. Maybe we need to give older people permission to play and one way to do that is to put them on the front of a box or in a television commercial. To get an idea of where I am going with this, think of that television commercial that is currently airing for whipped cream in which a senior sitting with the adults at Thanksgiving opts for the kiddy table so he can eat whipped cream too.

There is an opportunity here to create some new business and to do some good. What do you think?