November 23, 2017 will mark the beginning of Black Friday shopping, where retailers offer significant discounts across the store following Thanksgiving in the US. The event is primarily a US occasion, although retailers around the world have started to embrace the post-Thanksgiving holiday due to high foot traffic it can produce. Numerous industries rely on this holiday shopping event to make up a large portion of their fourth quarter sales, in particular toys and games. Toys and games will be looking to improve upon solid 2016 results, as once again traditional toys rely on Star Wars to help drive sales while video games see intense competition between the major console manufacturers. 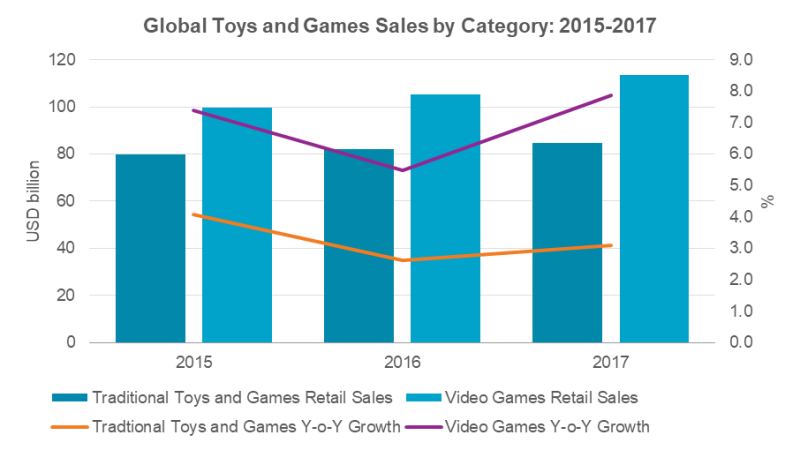 Global toys and games sales were fairly robust in 2016, and 2017 will likely be even stronger at over 3% in constant value growth. The uptick in sales can largely be attributed to the release of “Star Wars: The Last Jedi”. While 2016 also had a Star Wars movie release with Rogue One, this movie was not part of the core series and had a generally more serious tone; therefore, the impact was much smaller on toy sales, especially in comparison to the massive amount of Star Wars merchandise sales that occurred with the release of The Force Awakens.

Besides the impact of Star Wars products, Black Friday tends to cater toward long standing brands like Barbie, which are typically offered significant discounts. One area that has changed significantly in terms of products offered is board games. Retailers have started to more heavily promote new board game products, such as Pie Face, which have been gaining popularity as parents become more willing to try new brands in this space.

Black Friday typically sees a pricing war between major consoles, and 2017 will be no different. Both PlayStation 4 and Xbox One will see significant discounts and in some instances bundling with top games, such as Call of Duty: WWII. However, very new launches, such as the Xbox One X and Nintendo Switch, will not be bundling or offering much in terms of discounts. In both cases limited supply is the likely reason behind the lack of discounting; the Xbox One X launched as recent as November 7, 2017 while the Nintendo Switch has largely seen limited supply since its release in March 2017 as positive reviews of the console has kept the system in high demand.