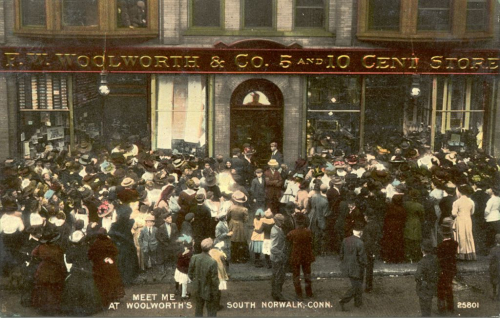 As these first national chains rolled out their stores, they were putting small, independent, local retailers out of business.

I don't have to tell you that these are some very challenging and at times unsettling times. Old business institutions like Kodak, Sears, Toys "R" Us and Macy's are badly weakened while new retailers like Amazon and EBay are growing at a jaw dropping pace, disrupting our sense of stability.

Yet, what I have found is that this is pretty much what was going on 100 years ago. That is what I discovered in a new book by Mike Wallace entitled Greater GothamI. It is a  history of New York City in the first 20 years of the 20th century.

Just like today, politics and society were in chaos. There was a strong populist challenge to the Republican and Democratic parties.  William Jennings Bryan, Eugene Debs and even Teddy Roosevelt led anti-establishment campaigns. And sadly, like today, there were cases of domestic terrorism taking place with bombs going off in places like New York's Wall Street and Chicago's Haymarket Square.

While this was going on, new retail juggernauts were coming into being. For example, those of us who remember Woolworths and A&P in the U.S. recall them as old fashioned, fusty businesses. In the early 20th century, however, F.W. Woolworth and A&P were red hot, revolutionary retail concepts.

They were hot stocks at the time.

Woolworth common stock opened at $55 went to $80 on the first day of trading. A&P used the capital it raised to open  a store every two weeks between 1903 and 1912.

As these first national chains rolled out their stores, they were putting small, independent, local retailers out of business. And, like today,  there were those who were upset by the new retail juggernauts and what they were doing to the local businessperson.

New technology was also a major disruptive factor. For example, it represented a challenge to copyright laws of the time. Believe it or not, those who produced the new phonograph records did not have to pay royalties to composers. The law had not imagined recording devices so the authors of the music were only getting paid royalties on sheet music sales. Eventually Congress had to create new laws to keep up with such changes in ways of consumption..

Abrupt changes in ways of doing business and technology, are a recurring story in history. What we are experiencing may be new to us but it  was as well for  our great, great grandparents and theirs as well. So, let's get used to the new normal, its going to become simply normal before too long.