What makes a game classic? Part of the answer is longevity. Most people consider chess classic; we’ve played it for centuries. What about playing cards? Woodblock-printed cards appeared during China’s Tang dynasty (618–907), while written rules for card games were first seen in15th-century Europe. Another characteristic of classic games is continued popularity. Games such as Monopoly in the 1930s and Scrabble during the 1950s broke sales records at first. But they continued to sell in the years that followed and do so today. Like chess and playing cards, these games are now available in electronic formats, but people still enjoy the tabletop versions. In the spirit of those other famous games, I’d like to propose the tile game Mahjong as a potential classic. 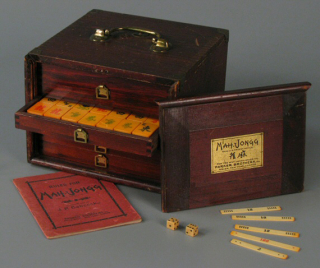 Mahjong’s roots reach back to China’s invention of playing cards. Early Chinese card illustrations represented amounts of money—as in gambling. Mahjong relates to a series of draw-and-discard card games in which players try to collect sets, or melds, of identical or related cards. The game rummy also makes use of this mechanic. Sometime in the middle 19th century, bone or bamboo tiles got substituted for the cards in this game. In Asia the tiles are thick enough to stand on end, so players easily conceal their hands; Westerners use thinner tiles on racks. The game caught on and made its way to Europe in the late 19th century and to America by 1920. Mahjong’s reputation in North America grew through the 1920s, but rules varied by location. The most popular version, played mainly by urban Jewish women, was called American Mahjong. And in 1937, with the formation of the National Mahjong League (NMJL), the rules became standardized. If we skip to the current decade, in 2010 Mahjong was (still) the most popular table game in Japan and Mahjong culture remains deeply ingrained in China, where the game recently appeared in both popular music and film. In the United States, board and table games of all kinds are seeing dramatic new popularity, including Mahjong. Not far from The Strong, Rochester Institute of Technology has its Nine Gates Mahjong Club, part of a larger North American group which includes similar clubs at M.I.T. and at U.B.C. in Vancouver—which brings me to my point.

My buddy Jim plays Mahjong. He’s an art director in advertising, and initially he “was more interested in the beautiful art and craftsmanship of the tiles” than in playing. Then he began collecting and researching and eventually became curious about the game’s play. Jim found a local teacher and took a few lessons, which led to his joining her group (the others are all women) for a weekly game of “maahj,” the official short name. Recently, he’s even begun teaching other newbies the game, and playing in tournaments. He likes the game and its design so much he got a tile tattoo. Now that’s a very personal testament to one man’s opinion that mahjong ranks as a classic game!