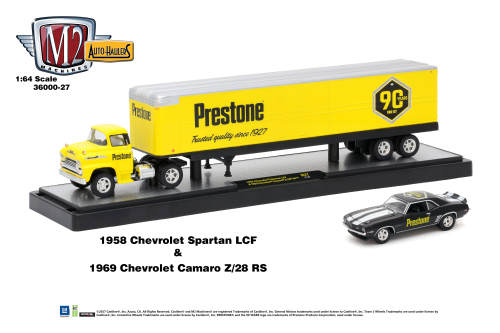 Hess, the gasoline company, has long been known for its annual toy car or truck. Less familiar is Prestone's toy car and truck editions. According to the company's press release: "Starting in October, Prestone will launch a collectible two-piece die cast model set in honor of the brand's 90th anniversary celebration. The models will be created in collaboration with M2 Machines."

I wanted to learn more so I spoke with Michael Marcangelo who serves as Marketing Manager for Prestone Products Corporation. He is responsible for driving growth across select retail and traditional channels. Here is my interview with Michael:

Richard:    This is Prestone’s 90th birthday and you have chosen to celebrate this anniversary with a toy vehicle. Can you tell us a bit about Prestone’s history?

Michael:    Since 1927, Prestone has protected drivers and their vehicles with cutting-edge products. From its iconic yellow jug antifreeze/coolant to its innovative stop-leak line, the Prestone brand honors its 90-year history by keeping its ground-breaking formulas laps ahead of the competition.

Richard:    Prestone, like Hess, has decided to play with toy vehicles. Well, not play exactly, but sell them. Can you tell us a bit why you are coming out with a toy vehicle as well as about your company’s history with toy cars and trucks?

Michael:    Our history dates back to 1993 when Prestone became a main sponsor for the NASCAR race car that was created for that season. In 1998, we created our first Die Cast truck, which was believed to be simple promotional item for the traditional, auto-part store marketplace.

For many years, we have been the number one branded antifreeze choice for car enthusiasts around the world. We believe there is no better way to celebrate this then to make a collectible available to those enthusiasts and their children that have supported our brand.

Richard:    And whom do you see as the consumer for your toys? Is it a child, an adult, an enthusiast?

Michael:    We want to believe it’s all of the above, especially when you have an Iconic brand like Prestone. We appreciate the idea that children of enthusiasts can grow up familiar with the Prestone brand and its family of products.

Richard:    You have chosen to come out with a vintage Chevrolet Box Truck. Can you tell us who and how it was chosen and designed and why you are going with a GM vehicle?

Michael:    The Camaro is extremely important due to the fact that is was specifically modeled after one of the cars within the Prestone family of automobiles. The glossy black paint, white stripes and custom wheels were hand selected to match an actual car that has been important to representing the quality that goes into the Prestone name. The GM truck was chosen to represent the long standing relationship with GM since the early development of antifreeze technology, which is now currently used in the GM Dex Cool formulation.

Richard:    I am interested in how this vehicle is being distributed. It will be sold through your distribution partner, M2 Machines and in the first year sold exclusively in Walmart but in limited quantities.  Can you tell us about the distribution plan; why you chose M2 Machines and why Walmart as your exclusive retailer?

Michael:    We chose M2 because they are known for their high quality die cast collectibles. We also wanted to reach as many enthusiasts as possible, so Walmart was the obvious choice. We are the only branded antifreeze on shelves at Walmart, so having representation in the toy isle was a natural fit as well as a great way to show our support to Walmart. The limited production number and quantity on shelves supports our goal to make this a truly special collectible that will “drive” enthusiasts to Walmart’s across America just to find a Prestone truck.

Richard:    What are your plans for next year and the year after? Do you plan to stay in the toy business?

Michael:    We want to continue to grow brand awareness whenever possible, while making the right choices that are impactful to the consumer. Prestone is an iconic brand recognized all over the world and we plan to make sure the brand remains recognizable with consumers of every age. Is there another die cast collectible in the works? There very well may be and you’ll have to stay tuned to find out! One thing is for sure… it will be iconic, impressive and all around cool!