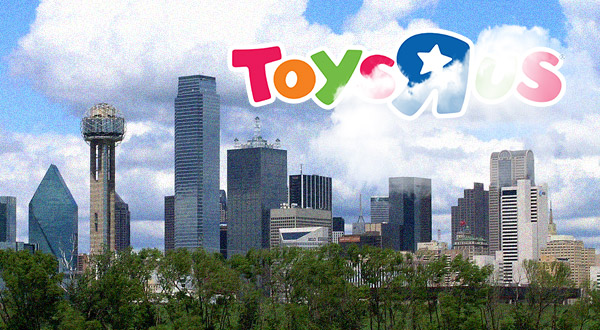 OCTOBER 4, 2017-The below post was written in anticipation of the Dallas Fall Toy Preview. I am now in Dallas and want to provide you with an update.

I have spent a day at the show, attended a Toy Association meeting about the Toys "R" Us bankruptcy and the cocktail party last night. I have also spoken with a number of exhibitors and attendees.

Having said that, their attitude is, yes Toys "R" Us Is a concern. They will, however, take whatever hits they have to take and keep moving forward. In fact, toy exhibitors with whom I have spoken are happy with the show and feel they are having very good meetings.

The Toy Association is taking action to assist toy companies. I have requested information about what they will be doing and will share it with you when I receive it.

SEPTEMBER 29, 2017 – We are on the cusp of the Dallas Fall Toy Preview and it is going to be a less than carefree crowd in attendance. Toy companies are worried as they assess their potentially damaging financial exposure from the Toys "R" Us bankruptcy filing.

Toys "R" Us owes a lot of toy companies a lot of money. In fact, it owes a total of $7.5 billion. That is a staggering amount to an industry that only has a few major players. The question in the air, going into Dallas, is therefore not about 2018 but about what kind of payment arrangements will Toys "R" Us make and what companies will survive much less thrive.

Adding to the concern is that Toys "R" Us seems to have lost whatever retailing mojo it had. According to a disturbing Washington Post article, "Toymakers say there is ‘widespread panic’ following Toys R Us bankruptcy":

On the same day that the Washington Post ran the article, September 28, 2017, Toys “R” Us officially announced its new brand positioning: “Today we Play”.  The company wants children to play outside. The company will open 42 "Play Lab" outlets where children can try out toys prior to buying. In addition, they will also hire toy demonstrators for the coming Christmas season. Toys "R" Us also plans to unveil a giant Etch A Sketch in downtown Manhattan.

Having demonstrators in the stores and erecting a giant Etch A Sketch are moves in a positive direction. They do, however, raise the question: Why only now, when they are relatively low cost and could have / should have been done a long time ago. It is long overdue and will require a continuing commitment by Toys "R" Us to make Toys "R" Us once again "The" toy destination.

Try reading the Washington Post article and the Toys "R" Us press release at the same time and see how off kilter it makes you feel. Toys R Us and the entire toy industry are in the midst of a very dangerous time. Talk about giant Etch A Sketches and demonstrators are a nice approach but seem out of sync with a moment that for some toy companies could challenge their very existence.