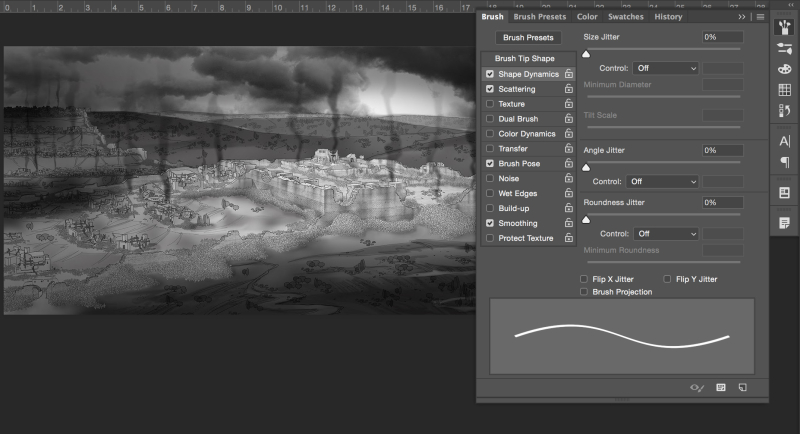 Digital concept art for an animated film alongside the Adobe Brush Preset menu.

So, a little over a year ago, when I was laid off from an embattled premium toy company along with a slew of other poor souls, I proceeded to my car holding my newly gifted cardboard box taking that lonely walk many of you have experienced at one time or another in this crazy thing we call life. Yes, I know that was a long sentence.

Anyway, not to ruin a beautiful day, I stopped off at my favorite running path on the way home begging the question—if a middle-aged man with a comb-over cries in the wilderness and there is no one to hear him, does he really cry?

Well, that question didn’t need to be answered because, to my surprise, the news traveled fast and my phone started ringing before I could even change into my running shoes. This led to several amazing life-changing opportunities as I sat on a bench overlooking a beautiful lake, eating a big bowl of ice cream. Oh yes, and there may have been a rather large chocolate chip cookie involved too—don’t judge.

One of those amazing opportunities was a freelance film assignment, which I agreed to immediately in between bites of my cookie, while another call right after that would lead to an amazing full-time position at a retail toy company as a Sr. Design Manager. I went from thinking, as most creative folks do, that I would never work again to actually having way too much work again.

Fortunately, the toy company waited for me to finish the film contract so I got to have two career dreams come true at the same time. So, to those of you creative professionals struggling to get up in the morning wondering how your career got off track, don’t give up because that phone will eventually ring. You will survive. In fact, if you developed a strong work ethic and a solid reputation, it’s a pretty safe bet you’ll do even better than you did before.

The image in this post is a digital concept painting of a set design for a film project that had countless bricks within an establishing shot of a ruined city. My first digital painting hinted at the bricks, but the studio wanted to actually see individual bricks within the concept art so their 3D artists had as much detail as possible. So, I used Photoshop and Painter tools to create several brick shapes and then made them into repeatable brushes that easily (if you have stunning good looks and actually know what you are doing) replicate hundreds of bricks in various positions on a grand scale.

Since most of you toy designers work in Photoshop, let’s take a look at the Define Brush Preset. First, create your brick (or any repeatable element you need) and make a brush out of it by making a selection (marque around it) of the image and then navigate to the Edit Menu/Define Brush Preset. Name your new amazing brush and click Yes. Navigate to the Window Menu/Brush Presets and select your new brush. If it’s all grayed out, just make sure you’ve selected the Brush Tool as your cursor. Wowsa!

Now, go to Brush Controls and use the intuitive sliders to vary the size, rotation and the number of repeatable images that will flow from your new brush. This will not only give your concept images the details you need for specification drawings but will also give them the visual impact you are looking for with faster speed and efficiency.

So, there you have at it! You can use this trick on all sorts of repeatable details such as rivets, stitched thread, surface textures and even hair—whatever you need. Just take the time to adjust the brush variant controls to exactly the brush variant you require and you will have entered into a much larger world of creative freedom.