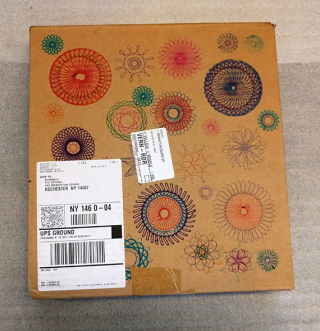 As Chief Curator for The Strong, I start each morning with a to-do list and an idea of what I’m hoping to accomplish, but I can’t always picture what will turn up in the course of a day. Sometimes an unsolicited package turns up as part of the day’s mail delivery. In this instance, the elaborate decoration on the cardboard box gave me some hints as to what might be lurking inside. 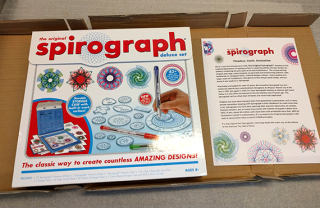 Sure enough, when I opened the box, I discovered a brand new edition of a classic toy—Spirograph. Seeing the Spirograph set sent me back to my own childhood when my sister and I enjoyed one of the original Spirographs that Kenner introduced to the U.S. in 1967. Kathy and I must’ve received our Spirograph about the same year. Typically, our parents favored less-expensive, unbranded toys that didn’t receive heavy promotion on Saturday morning cartoons. But, with Spirograph, Kenner had a unique product in the marketplace. Its British engineer inventor, Denys Fisher, had spent years toying around with hypocycloids—a point fixed on a circle that rolls around inside the circumference of another circle. The plastic gears and rings of Spirograph first appeared at the 1965 Nuremberg Toy Fair, and that’s where Kenner snapped up the American rights to a toy that was good clean mathematically based fun—but let kids produce astonishing swirling designs, perfectly suited to the psychedelic patterns then all the rage in popular culture. Now, in the 2000s, Spirograph has enjoyed a degree of resurging popularity and Kahootz, the company that currently produces the toy, sent one to The Strong as part of nominating it for inclusion in the National Toy Hall of Fame. A decade ago, Spirograph was one of the finalists for the Hall of Fame but, it didn’t make the short list for 2017. Still, the folks at Kahootz made some excellent points about how Spirograph’s “unique pairings of gears and rings create instantly recognizable and mesmerizing patterns, seen worldwide on Instagram feeds, clothing designs, tattoos—even popping up in large-scale art installations. One glance at that unique spiral design, and you know it was made by a Spirograph.”

So a tip of my hat to Spirograph on the occasion of its 50th anniversary. And, even though it isn’t among the 2017 finalists for the National Toy Hall of Fame, it remains an enduring classic in my own estimation and I hope that its fans will circulate a campaign that gears up enthusiasm for nominating it again in 2018. After all, what goes around, comes around…

For more on toys, games, and all sorts of other stuff for play—past and present—from Chris and his museum colleagues, visit The Strong's Play Stuff Blog