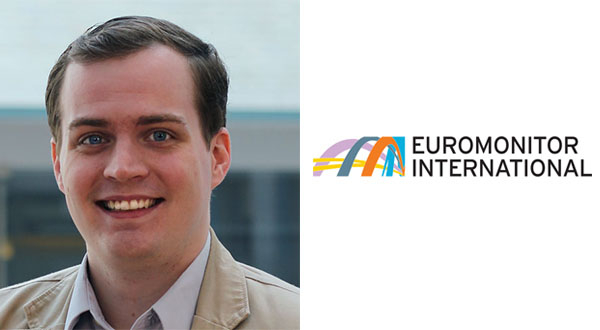 In 2021 China overtakes the US as the largest total toys and games (traditional toys + video games) market in the world.

Matthew Hudak is a Toys and Games analyst for Euromonitor International and a graduate of the University of Chicago. Matt has appeared on NPR and quoted in The New York Times, and the Wall Street Journal. Here is my interview with Matt:

Richard:    Euromonitor does more than analyze data, it actually forecasts sales several years out. In fact you are now forecasting out to 2021. Are there any predictions you are making that may surprise our readers?

Matt:    Well one prediction that may or may not be surprising, depending on where you sit in the market, is that toys-to-life products will continue to fall. A lot was made about Disney Infinity’s exit from the market in 2016, but there’s really no indication that there might be some 2017 rebound for the product type, we are expecting it to continue to fall as children simply are not interested anymore and parents are more inclined to buy robotic/interactive toy instead that can also teach.

Richard:    What should we all be looking for in the coming years?

Matt:    Interactivity I feel could really be an absolute necessity for traditional toys in the years to come. By this I means toys that can sense and actually play with kids directly through the use of robotics, AI, and increasingly sophisticated sensors will have a huge advantage in the future. Current examples would include toys like the Anki Cozmo, and increasingly these toys are fitting into an ecosystem that children are becoming more accustomed to, namely smart/connected households.

In addition, parents are having fewer and fewer kids per household which means two things. First, parents will have more to spend on toys per child, making these pricier electronic interactive toys easier to accept and budget. Second, more single child households, which means parents will want to find ways to give their child a playmate, and these robotic toys while not wholly the answer, could definitely help. It’s also a big advantage that interactive toys increasingly can be used to teach children important skills like coding, such as LEGO Boost. And outside of interactive toys, really all things educational related is expected to see major growth, and we’re expected STEAM toy retail sales to grow by 19% in constant/real value from 2016 through 2021.

Richard:    What kind of years do you expect 2017 and 2018 to be and will the toy industry feel the impact of the extremely popular Nintendo Switch?

Matt:    2017 should still be fine for the traditional toy industry with over 3% global growth expected in constant value sales, which is slightly higher than 2016 growth, in large part because there’s a lot of licensed content out there to drive demand. We’ve already had consistent toy drivers like Transformers, Cars, and Spiderman, new hit films like Wonder Woman, which could help expand the traditionally boy focused action figure category toward more girl purchases, and finally another major Star Wars film. There’s some worry that with all these major films that many brands will cut into one another during the holiday season, and while this is entirely possible it also means a lot of kids will be looking to get toys related to their favorite films this year. So the industry as a whole should benefit even if some brands don’t perform as strongly as they have historically with big movie releases. 2018 we expect things to be a little bit slower with a little under 3% growth, in part due to the big wave that a blockbuster heavy year like 2017 will produce.

As to the Switch, it’s definitely something that is poised to directly threaten traditional toy sales, as its relatively low price point and kid friendly games could be a big appeal to parents. The good news for toy makers, however, is that Nintendo has not changed its forecast for shipments in 2017 despite high demand. They simply cannot make this console any faster than they are making it, meaning these will be very hard to find during the year and likely end up in the hands of adults who want it for themselves and are willing to constantly hunt online or in store to find the console. But 2018 could be a bigger issue. Those adult Nintendo enthusiasts will likely already have the system, costs may come down and make the console cheaper, and there’s a potential for a Pokémon game release for the system. So if all turns out well, Nintendo Switch could be a top request by kids for the holiday 2018 season.

Matt:    Right now the biggest impact they’re having is in board games, which grew immensely in 2016 based largely off of the growth in the US and the impact of the hobby board game market. Adults have really taken to board games that allow for deep long play sessions, like Pandemic Legacy, or games that can be played quickly and in groups at parties, like Codenames. And in other areas products that can really market toward adults, such as figurines with nostalgic licenses, are performing well.

Outside the US, in a lot of developed Asia Pacific markets like Singapore or Japan adults have a major influence. And given that these countries in the region aren’t seeing a lot of new child births of family formation, this adult market is likely to grow in importance so that by 2021 we expect adults to comprise nearly 18% of traditional toy purchases in Japan and nearly 29% in Singapore. To give some comparison, the US, although it will also see an impressive rise in adult toy purchases is only expected to see about 8% of traditional toy sales for adults by 2021.

Richard:    Tell us a little about 2016. Which toy categories grew and which shrank?

Matt:    I think the biggest story is that globally games and puzzles managed to grow faster than construction toys, which had been the fastest growing area of toys for the past few years. And the big reason behind this was North America, where games and puzzles were way up while construction was down. Surprisingly the uptick in games and puzzles and decline in construction aren’t as directly related as you might think (although certainly partially). For the most part the slowdown in construction appeared to have been from bit of fatigue in consumer interest in buying more LEGOs as well as the fact that LEGO Star Wars sales in 2015 set the bar pretty high. Games and puzzles on the other hand had a ton of interest in newer board games, typically produced by smaller independent companies, like Codenames or Arkham Horror. Outside of that, globally outdoor and sports toys continued to do very well, in large part due to Nerf while dress-up and rollplay toys saw a decline. Much like the declines of 2015, this global decline can almost entirely be linked to Japan where Yo-Kai Watch sales have fallen since they reached their peak in 2014.

Richard:    As you look across your desk, do you see any toys on display? If not why not and if so what are they?

Matt:    I see an etch a sketch, a view-master, and a cute Darth Vader figurine. The first two were items I accrued at a conference, while the last one is simply there to make me smile.