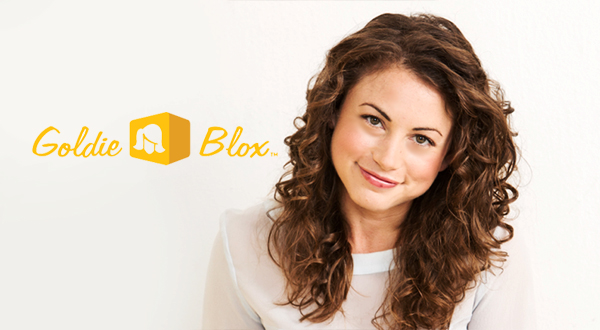 The Etch-A-Sketch also taught me how to "let go of your darlings" — you had to shake your artwork away if you wanted to create something new.

Debbie Sterling is the Founder and CEO of GoldieBlox, the award-winning children’s multimedia company disrupting the pink aisle in toy stores globally and challenging gender stereotypes with the world’s first girl engineer character. Debbie is an engineer, entrepreneur, and one of the leaders in the movement toward empowering girls to build their confidence, dreams and ultimately, their futures. She was named TIME’s "Person of the Moment,” honored by the National Retail Foundation as one of 25 “People Shaping Retail’s Future,” and was recently added to Fortune Magazine’s prestigious “40 Under 40” list. In 2015, Debbie was inducted as a Presidential Ambassador for Global Entrepreneurship and honored by the National Women’s History Museum with a “Living Legacy” Award for her work to empower girls around the world. Debbie received her degree in Engineering at Stanford University in 2005.

Richard:    You founded GoldieBlox in 2012 and found immediate success and a great deal of public attention. How did you do it and what has happened since?

Debbie: In March of 2011, I became obsessed with the idea of getting girls interested in STEM through toys. Even though I had a full-time job at the time, I spent about nine months doing research in my spare time about kids, toys, brain development, gender differences, etc. That research led me to an "aha" — that combining storytelling with building was a way to get girls interested in STEM. I made it my New Year's Resolution to quit my job to focus on GoldieBlox full-time, and in 2012, I found myself alone in my apartment giving it a real go.  In February 2012, I brought an early prototype of an illustrated storybook-meets-construction set to the NY Toy Fair to get advice from industry veterans. Unfortunately, most of the people I met with weren't very receptive. I was told that toy patterns were innate – girls liked playing with dolls and boys liked building. I was told that there wasn’t a market for construction sets for girls, but I knew these were outdated stereotypes that needed to change. Since the toy industry didn't seem ready to embrace the idea, I decided to take it to Kickstarter and use crowdfunding for our first production run. Once we went live on Kickstarter, GoldieBlox went viral literally overnight. Consumers and the press loved the idea and the industry took notice. Through social media, earned PR and viral marketing, GoldieBlox quickly proved there was real market demand globally for more empowering toys and role models for young girls. What I realized was that by going outside the traditional path and going straight to the consumer, we didn't just crowdfund a toy, we really kickstarted a movement that has shifted an entire industry to re-think how they market to girls.

Richard:    Since the company's launch, you have continued to expand into other forms of play and have even, in a partnership with Random House, added books. In the beginning it looked like you were into activities or construction for girls. In what business do you now see GoldieBlox?

Debbie:    From the very beginning, our vision was to build an entire franchise around GoldieBlox that spans toys, books, entertainment, experiences, education and lifestyle. Just like the Disney Princess franchise has enabled young girls around the world to experience a "princess phase", we want to give girls the chance to play out their "maker phase". And hopefully, for some it won't just be a "phase", but the beginning of a lifelong passion. Although we started with construction toys "disrupting the pink aisle", we have quickly expanded to YouTube shows, chapter books, apps that teach kids how to code, a STEM badge program with the Girl Scouts and so much more. The reason we've expanded so quickly is because we've always had storytelling at our core. GoldieBlox didn't just start out as a construction set, we developed the world's first girl engineer character, Goldie. Sharing her stories through our Random House chapter books, live action YouTube series, and more helps fill an enormous gap in the landscape of children's toys and media: the lack of strong female characters. We need to be creating role models for young girls that show them they can grow up to be more than the princess that needs rescuing. Goldie and her diverse group of friends are timely role models for the next generation of kids who self-identify as "makers".

Richard:    How do you develop new products and are you open to ideas coming from the outside?

Debbie:    So far, we've developed everything internally – from our toys to our apps to our YouTube shows, even our viral videos. This has helped us ensure consistency of our brand across multiple platforms and we've learned a ton about how to really appeal to young girls in the process. Moving forward, we are totally open to ideas coming from the outside.

Richard:    Are there any product areas you plan to enter that might surprise us?

Debbie:    As GoldieBlox continues to grow, there are different product and entertainment areas we are exploring. The chapter book series was a major step for GoldieBlox and a new way for Goldie fans to engage with the character. We recently released our YouTube series with the first live-action Goldie to really bring her to life. Each new product we create, we are looking for new ways to get Goldie in front of more kids to engage with her and her maker lifestyle, in whatever form that is. Being headquartered in Silicon Valley is definitely an advantage when it comes to being at the cutting edge of what's next in technology as it relates to children's play. We intend to take advantage of that so long as we always remember at the end of the day that great storytelling must always be at the core.

Richard:    When you were a child, were there any toys that, looking back, were a harbinger of who you were to become?

Debbie:    Most of the engineers I know grew up playing with construction toys. Unfortunately for me, my sister and I thought those were "boys toys" and never considered them — which is one of the many reasons why I started GoldieBlox. The toy I would spend hours playing with as a little girl was Etch-A-Sketch. I always loved art and it really inspired my creativity — I had so much fun exploring what I could create under the mechanical constraints of 2 simple knobs. Years later, I discovered the intersection of art and engineering and realized it was my passion. The Etch-A-Sketch also taught me how to "let go of your darlings" — you had to shake your artwork away if you wanted to create something new. This is a lesson I've used repeatedly in business.

Richard:    Do you have any toys on your desk? If so, can you describe them?

Debbie:    In addition to the GoldieBlox toys I have strewn all over my desk (including one of our pegboards that I use as a mousepad), I have a vintage Rube Goldberg hobby kit from 1965 that was gifted to me by Albie Hecht, the former President of Nickelodeon.