Sawyers, Bakelite Model B in Brown dating to the 1940's

Did you have a View-Master? I did too. I was recalling my View-Master with a friend when I began wondering about the product's early days. So, I decided to take a look back and see what View-Master looked like and what people were looking at when View-Master first hit the market.

And when did View-Master hit the market? Surprisingly to me, the View-Master dates back to 1939 when it was introduced at the New York World's Fair by a company in the photograhic film businesses named Sawyers. To my surprise, it was  was largely targeted at adults for its first few decades with scenes that featured images of anything from Australia to Zululand.

Sawyers was purchased by GAF in 1966 and eventually ended up as a Mattel brand where it became a child's toy. 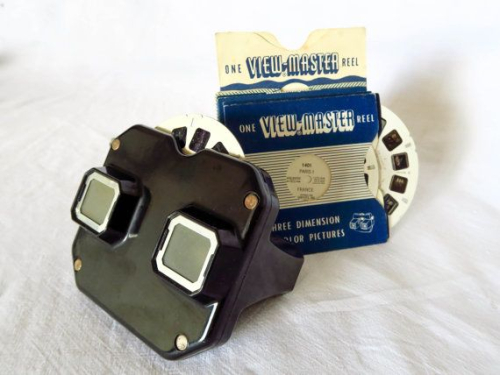 Until the 1960's, View-Masters were made from Bakelite, a heavy, breakable precursor of plastic. Above is a black version from 1950. In 1952, View-Master was advertised with cameras