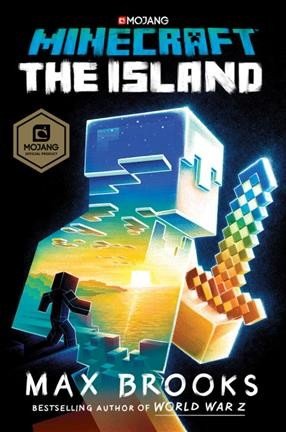 Are we on the threshold of a new paradigm for how we play? That thought went through my mind as I recently learned about two new novels that combine the classic novel with game play and in doing so create a new form play as well as an innovative way to expand revenue and generate enthusiasm.

"Minecraft: The Island" is a novel by Max Brooks, famous for having written "World War Z". In this case, he has been commissioned to create a novel set in the world of the game, "Minecraft".

In this new novel, a human character finds him or herself (its not clear who the person is), in the world of Minecraft and having to deal with its very special physics. The novel allows the reader to experience Minecraft in a whole new way and, by doing so, expand the Minecraft experience. Here is how New York Times writer Alexandra Alter puts it her article "‘Minecraft: The Island’ Blurs the Line Between Fiction and Gaming":

He [Max Brooks] developed a plot that conformed to the Minecraft universe so closely that someone reading the book could recreate the narrative within the game and play along…In the process, he may have also created a strange new entertainment category, one that hovers somewhere between fan fiction, role-playing games and literature — a novel set in a game, that can itself be played within the game."

It would seem, of course, that the  novel is aimed at Minecraft enthusiasts, a big and dedicated cohort of fans. It appears also, however, to be intended as engaging fiction and therefore to appeal to those who are not currently playing the game. What a great way to expand your revenue and your fan base, all at the same time.

"The Atlas Pursuit" by David Wise appears to be part novel (think "The Da Vinci Code"), part treasure hunt (think Pokemon Go) and part puzzle. The New York Times writer, Julie Besonen, has a nice sense of the books economic impact in her article, "A Spy Novel Whose Clues Are Found on Landmarks". It appears that the novel drives incremental revenue by getting readers to pay for help with clues. Here is how she puts it:

There are no easy answers to the novel’s riddles, and sleuths who get stuck can contact Mr. Wise for hints. His website includes a help page — and a link to PayPal. At the $10 level is a test to see what’s right and what’s missing. For $25, the author is for hire for up to 30 minutes via email. The fee for a phone call is negotiable.

Again, the novel uses technology to break down the walls between analog fiction, gaming and marketing to create not only a whole new way for the reader to engage a story but also for the publisher or the author (its not clear) to enhance revenue.

Are these novels or are they a new form of storytelling? I'm not sure but whatever they are, they are a major step forward into a world of storytelling that increasingly engages us in ways we could never have imagined just a few short years ago.