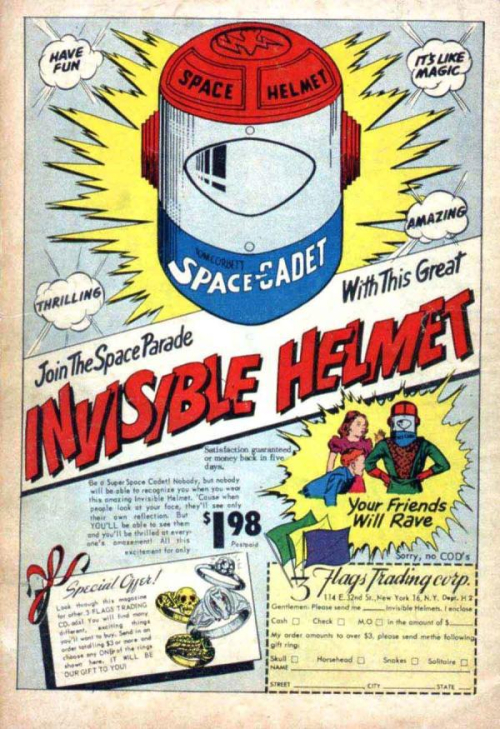 One of the joys of childhood was, at least when I was growing up, looking at the toy ads in comic books. They were wonderfully outrageous in every aspect, from what they promised to what they delivered. Whoever came up with these products had some pretty creative (and a bit odd) minds.

I can clearly recall a big kid from my neighborhood walking around in a helmet much like the one depicted above "Space Parade Invisible Helmet" from "3 Flags Trading Corp." I was about 6 years old so I thought he was highly sophisticated. 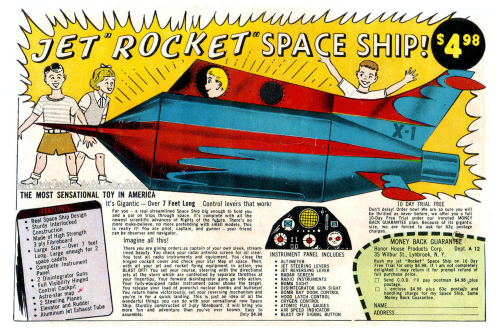 The above '"Jet' Rocket Space Ship" which came in a "Real Space Ship Design" also included "Two Disintegrator Guns." It was over 7 feet long, made of fibre board and contained an aluminum exhaust. And all for $4.98. Actually, if you read the full ad for the Texas Ranch you don't exactly get a ranch. You get one square inch of land upon which, conceivably with the right financing, you can build one. No, the above ad is not for a toy. Its for a live raccoon. I'm going to repeat that: "A LIVE RACCOON". Doesn't that seem vaguely illegal? Well, at least Hialeah Pets didn't think so. "Honor House" was one of the great comic book ad companies. The above machine gun brought a whole new level to playing war. One of my friends actually had one of these and I can still recall how excited we were.