“Stop playing with that ball inside the house! You’re going to break something—take it outside!” Those are familiar phrases that I heard when I was younger, and I am sure many other children can relate. What helped alter parental attitudes towards indoor ball play? Well, that would be the introduction of the Nerf ball, a four-inch foam ball officially marketed as “the world’s first indoor ball.” 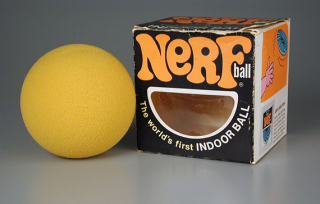 According to Tim Walsh in Timeless Toys: Classic Toys and the Playmakers Who Created Them, inventor Reyn Guyer wanted to create a game that would garner as much popularity as Twister (a Guyer-conceived game that was manufactured and sold by Milton Bradley). In 1968 Guyer and his creative team started working on a prototype for a game they dubbed “Caveman” which utilized “fake money, paper stepping-stones, and rocks cut from mattress foam.” Guyer and his engineers play-tested the game by  jumping on the paper stepping stones, collecting fake money, and throwing “rocks” at one another. At some point during their attempt to perfect the game, Guyer had an epiphany—what if the polyurethane foam rocks were shaped into balls? If a foam rock was reconfigured into a sphere it could become a “soft, safe ball that could be thrown and kicked indoors with no fear of knocking over a lamp or breaking a window.”

With that realization, Guyer and his colleagues scrapped the “Caveman” game plan, and instead focused on creating indoor sporting games using their newly named Muffball. With prototypes in hand, Guyer approached Milton Bradley which rejected the new sporting goods concepts. Guyer then met with staff at Parker Brothers, who welcomed the idea with one provision—Parker Brothers would manufacture and market only the ball, not the sports games that Guyer and his team had developed.

In 1969, Parker Brothers introduced its newly re-named Nerf ball and made it available in four colors:  yellow, orange, red, and blue. According to Walsh, the term nerf was used widely in the hot rod racing scene between the 1940s and 1960s when describing using one car to bump another car out of the way. Although initially store buyers responded skeptically, Nerf balls bounced off store shelves and into homes—more than 4.5 million of them were sold in the first year alone. Building off the success of the original Nerf ball, in 1971 Parker Brothers expanded the concept with a seven-inch Super Nerf Ball and the Nerf Disk. In 1972 the famous Nerf Football arrived on the scene, a product still manufactured and sold by Hasbro. Since the late 1960s, the  Nerf brand has greatly expanded to include Nerf Sports (a line of products that resemble real sports balls),  Nerf Vortex Blasters  (plastic guns that use foam darts), Nerf Rebelle (a line of products marketed towards girls), and Nerf video games. Personally, my favorite Nerf product was 1972’s Nerfoop, which was created for indoor basketball play. It consisted of a four-inch foam ball (similar to the original Nerf ball) with basketball seams and a metal hoop with brackets that you could put over the back of your bedroom door. I think I need to get one of these for my office—I mean it can be used indoors!