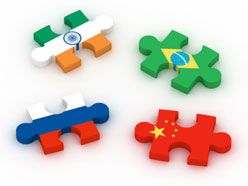 The American press has been full of stories about retail store closings. That, however, is not true for the rest of the world, particularly for countries considered to have emerging economies.

In support of this notion comes research from global consulting firm, A. T. Kearney.  They have provided a list of emerging economies with the most robust retail growth. It is entitled  "The 2017 Global Retail Development Index" and I suggest that you take time to read it.

This is an interesting list, not only for retailers wishing to enter these markets, but for toy companies looking for new outlets for their products. The report is extensive and provides some fascinating information. I am, however, going to provide some of my own insights and suggestions.  First, here are the 30 countries on the list in order of strength:

The first thing I looked at were the BRIC countries (Brazil, Russia, India, and China). India and China are in the number 1 and 2 spots. India has passed China for the first time and that, according to A. T. Kearney, is due to a middle class that is growing as well as a surge in consumer spending. In addition, India has been aggressively encouraging western investment. It may surprise you to know that India has the largest English speaking population in the world.

Both of these countries lend themselves to western retailers and toy companies. China because the toy industry has a long history there and westerners have grown to understand the culture. India, because it, like the US, was a former British colonies and therefore shares the same judicial systems, i.e. British Common Law.

Why do the other  three BRIC countries, Russia, Brazil and South Africa, all find themselves in the bottom 10?  The answer is that all three are raw material exporters (particularly coal and oil)  so the collapse in raw material prices has badly effected all three economies. Number 22 Russia faces further challenges due to the western embargo put into effect after their invasion of Crimea while number 28 Brazil has been faced with political upheaval.

Number 3 Malaysia, in third place, has a strong economy so it is undoubtedly a good place to invest but number 4 Turkey and number 5 United Arab Emirates are in a pretty rough neighborhood right now. Turkey borders Syria and is experiencing political unrest at home while the United Arab Emirates along with number 11 Saudi Arabia and unlisted Egypt find themselves in a stand-off with Qatar and Iran that could get messy.

Number 9 Peru and number 10 Colombia have settled down after decades of gorilla activity to become stars on that continent. That is in sharp contrast to neighbor, Venezuela's collapsing economy.

Bottom line, it looks like top 10 members India, China, Malaysia, Peru and Colombia are the places to go. At least for now.