Before there was plastic, there was tin. It was a durable material that lent itself to various shapes and was a great vehicle for displaying bright colors. The above Felix the Cat toy is interesting for its great look (love the tail) and its origin in Germany.

Germany was a low cost producer and major exporter of toys so these Felix wind up toys could have been both for export to the US and for domestic sales in Germany.  The Germans economy was undergoing a great deal of stress and their wages were comparatively low. This resulted in low prices that threatened American manufacturers. In fact, I have discovered a Congressional hearing that took place in the 1920's with toy industry leaders like A.C. Gilbert making the case for tariffs on German made toys. This Felix toy was probably just one of the imports that worried Mr. Gilbert. 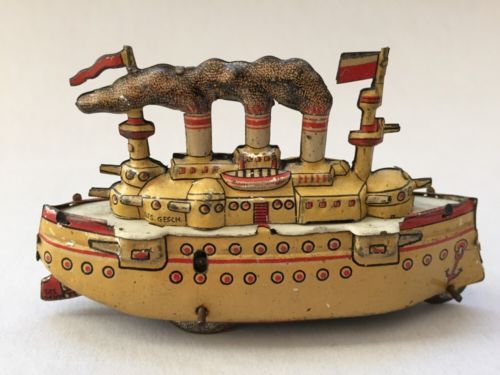 Above is another toy made in Germany. It sold for a penny at the time. I did an inflation calculation and found that a penny in 1920 would be 29 cents today. Now that is a great price / value ratio. 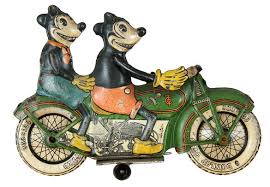 The first Mickey Mouse movie premiered in 1928 so the above motorcycle speaks to how rapidly Disney found success with the character. I love the detail and the natural look of Tom the Climbing Monkey. He, like many of these tin toys, are as much art as they are toys.