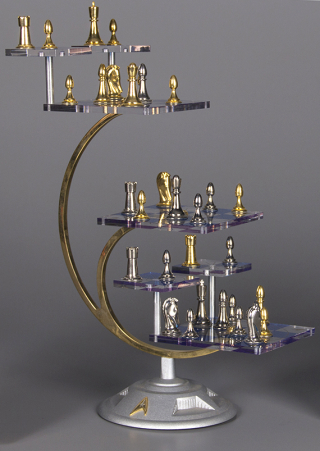 In 2015 David Howe, an avid chess enthusiast in Rochester, donated 40 different variations of chess sets to The Strong’s permanent collection. Howe’s gift included 4-Way Chess for four players, 3 Man Chess in the Round, Grand Chess, Knightmare Chess, and Stealth Chess to name just a few. A chess purist might ask, why tamper with a classic? But within his donation, a chess set caught my eye and attracted other museum staff members’ attention: The Official Star Trek Tridimensional Chess Set.

Maybe you remember seeing the game in the second episode of the original Star Trek series, titled “Charlie X,” which concerns a human boy with extraordinary mental powers. Captain Kirk called checkmate while playing against Mr. Spock (a move later declared impossible because Kirk was already in check) and Spock characteristically replied, “Your illogical approach to chess does have its advantages on occasion, Captain.” The chess set appeared in many subsequent episodes throughout the television series, as well as the films that followed years later. Numerous interpretations of the game’s play accompany at least two different diagrams of its initial setup. Mastering the setup and obeying all rules of regular 2-D chess, there are several complicated twists—all made easier to understand if one views the game from the top.  White begins at the lowest level (queen’s level) and black begins at the highest. A piece can finish its move or take an opposing piece on the square one level directly above or below, provided the move is not blocked by any other piece in its path. Even more devious, the four extra board pieces, called “attack boards” may also move and optionally pivot 180 degrees on a player’s turn. Player Charles Roth said “pawns are often a nuisance, at least early in the game. But watch out for those warp-speed ‘piloted by a pawn’ attack boards.” As this description probably conveys, the game can become amazingly complex in a short time. The Strong museum’s example is a 1995 product of Franklin Mint—a firm famous for such recreations and collectors’ editions. And this year, Franklin re-released the set, as a celebration of the original series’ 50 year anniversary. In that second episode 50 years ago, when Spock obliquely criticized his logic, Captain Kirk answered, “I prefer to call it inspired.”