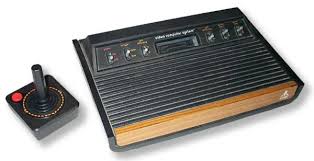 The Atari console was far more than the most popular toy of 1978 but the foreshadowing of a whole new era of play.

Do you remember "Tin Men", the movie starring Danny DeVito and Richard Dreyfuss? It was the story of two aluminum siding salesmen, fighting with each other, but mostly fighting to make a living in early 1960's Baltimore. It was very funny and filled with whale-like Cadillacs and old fashioned restaurants.

What struck me, when I first watched it, was the movie's ending.  The last images we saw were a Volkswagen rolling across the screen as a McDonald's Golden Arches sign was erected in the background. It was author Barry Levinson's way of marking the end of one era and the beginning of a new one.

That was the feeling I had as I read a fun piece by blogger, Rose Heichelbech, in her article "What Was the Most Popular Toy the Year You Were Born?".  It covers the 1930's, 40's,50's, 60's and 70's and offers some nice nostalgia for those born in those years.

Yes, I was amused by the toy that was popular in my birth year as well as remembering what toys were in vogue at various moments during my life. What stopped me, however, was the most popular toy of 1979, the Atari video game console. By not giving us any toys after 1980 (the Rubik's Cube) she is, either intentionally or unintentionally,  giving us her version of the Volkswagen and Golden Arches that ended "Tin Men".

We, Ms. Heichelbech's readers, know that the Atari console was far more than the most popular toy of 1978 but the foreshadowing of a whole new era of play. Video games were going to dominate play for millions of children and adults in the decades to follow. It was, in retrospect one of the, if not the, most important year in the history of play.

Enjoy the article, its well worth a read, but think about what comes later as you do. It's where we live now.