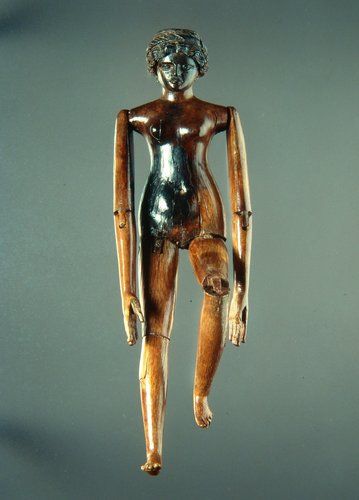 While doing some research, I came upon this image of a doll owned by a Roman Teenager named Crepereia Tryphaena and found in her grave. Buried in the second century AD, Crepereia must have loved her doll as those who entombed her felt that she could use the solace in the afterlife. She was laid with her face facing the doll.

Interestingly Crepereia was buried in her wedding dress. It appears that Roman girls, before getting married, left their doll in the Temple so it is possible that she had not yet married. No one knows for sure. The combination of the wedding dress and the doll give a poignancy that we can only wonder about. 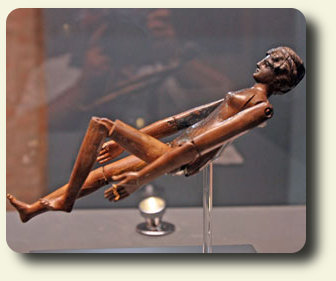 The doll itself was made of ivory and had six points of articulation. Here is how the author, Roderick Conway Morris, puts it in  his 2013 New York Times article "Art, Propaganda and Death in Ancient Rome":

Along with this lovely plaything were buried the doll’s miniature clothes, necklace, earrings and other jewelry as well as tiny combs, mirrors and a little jewel case, faced in ivory and bone. The doll’s minutely carved hairstyle is a meticulously realized version of one made fashionable by the Emperor Antoninus Pius’s wife Faustina Major and their daughter Faustina Minor.

She sounds like a Roman version of a celebrity, fashion doll (think Hannah Montana), Barbie or an action figure. She has six points of articulation plus clothes and accessories. I checked and most modern dolls have from three to 22 points.

It looks like the Romans anticipated Barbie by a couple of thousand years. I guess nothing really is new under the sun.