Over the course of my life, I have witnessed the gradual disassembly of bricks and mortar retail. It began with stalwarts like Woolworths (the Walmart of their day) and lesser lights like Zayre and Ames going out of business as more nimble chains like Walmart and Target began taking their place. The result was the death of local and the near-death of regional retailing.

Now we are watching, not the demise, but the implosion of bricks and mortar retailing. Here is a list of just some of the retail bankruptcies and downsizings we have seen recently:

So, what's going on? At least three phenomena are causing bricks and mortar retail to shrink:

The Atlantic Magazine has a great article by Derek Thompson. Titled, "What in the World Is Causing the Retail Meltdown of 2017?", it has a great chart that tells a lot in a few words and numbers.

SHOPPING SPACE PER PERSON, PER COUNTRY 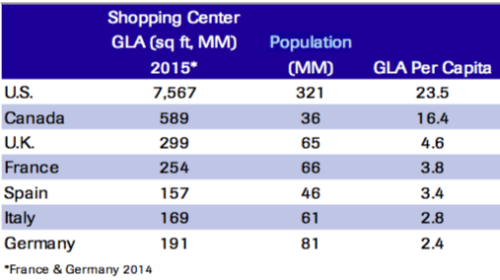 Here is how Mr. Thompson illustrates the above chart:

The number of malls in the U.S. grew more than twice as fast as the population between 1970 and 2015, according to Cowen Research. By one measure of consumerist plentitude—shopping center “gross leasable area”—the U.S. has 40 percent more shopping space per capita than Canada, five times more the the U.K., and 10 times more than Germany.

Yes, the sheer number of malls, their deterioration and the resulting impact on stores anywhere in size from Marbles the Brain Store to Sears has had a devastating impact on bricks and mortar retailing.

But that's certainly not all of the problem which takes us to number 2:

2.    The impact of e-commerce sales and the Millennial generation

The internet, that bastion of e-commerce retailing, is providing consumers (particularly Millennials) with what they want most: Certifiable lowest prices and convenience. Millennials and their children are not that crazy about going to the mall anyway so why drive and be greeted with out of stocks, busy highways and over-sized parking lots. And its not going to get better, their children (Generation Z) don't feel like driving either so expect e-commerce to continue to grow.

3.    Millennials are more experiential than acquisitive

Perhaps its because they have never known a flush economy or that they just don't feel they will ever have the things their parents have acquired. For whatever reason, they would rather take a trip, go out to dinner or jump out of an airplane than buy, buy, buy. They're not purchasing expensive suits and dresses but they are eating sushi…such is the world as we now know it.

Bottom line, if you are a bricks and mortar retailer you can hope your competition dies off (and the way things are looking that's not a stretch) or you can figure out how to be better than they are. Do you have an online component to your business that is impactful? Is shopping in  your store fun and / or engaging? Are you in a location that is pleasant to visit and easy to find?

Dinosaurs are falling. This is not the time to sit back. Do something!