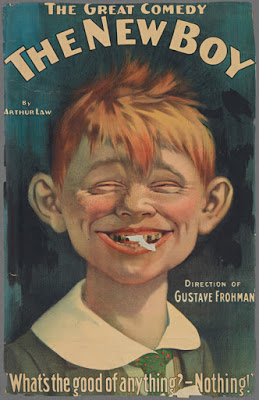 Nope, that's not Alfred E. Neuman. That is a character from the 1894 play, "The New Boy". This image predates Mr. Neuman's first appearance on the cover of Mad Magazine by a full 52 years.

I was, as I am sure many of you are now, surprised to learn this information. After all, I had always believed that Alfred E. Neuman was the creation of Mad Magazine.  He was, as I heard it whispered about, a real person who lived in  an insane asylum. That Mad Magazine had found his picture and used it. It seemed funny but a little shameful, all at the same time.

So if Mad Magazine didn't originate Alfred E. Neuman, who did?

Well you can find out by reading a fascinating article in The Paris Review entitled: "A Boy with No Birthday Turns Sixty. A long and tangled History." The author, Sam Sweet, informs us about "The New Boy" as the origin for Alfred E. Neuman's puzzled yet happy boy / man face. It seems that the play was about  a man passing himself off as a boy.  The character's name was Archibald Rennick and the face of Mr. Rennick, who we now recognize as Alfred E. Neuman, was plastered on posters all across America.

It was from this beginning that Mr. Sweet is able to trace this uncomfortably adorable (or is it adorably uncomfortable?) image in any number of ads, a campaign button, a mask and even brooch.

I suggest that you read the entire article because if you secretly or openly read Mad Magazine when you were a kid its well worth the time.