Interactive toys, which are electronic toys  that can directly play with a child, either via movement or speaking to them, such as WowWee robots, have becoming more commonplace amongst toy makers as demand for these products has risen. While many of these products are largely aimed purely at entertainment, new introductions suggest that there could be a new direction for    these products. 2016 introductions like Mattel's Fisher-Price Think & Learn Code-a-pillar and Spin Master's Meccano MeccaNoid G15, as well as LEGO's recent CES introduction of the BOOST building set, all encourage children to develop code for a   toy that plays with them. The combination of an interactive smart toy with tools for educational improvement may soon become the norm, as they may finally be able to bridge the gap between keeping children interested in both playing with and learning from their toys. 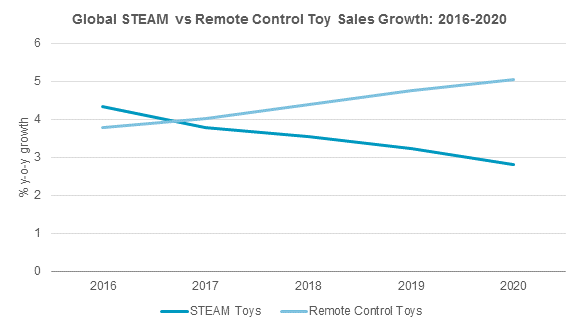 Toys-to-life products were first introduced in 2011 with Skylanders and blended physical toys and video games to create a new interactive toy experience. Many other companies soon joined in, and the industry grew by over 400% between 2011 and  2015, reaching USD1.4 billion. However, in 2016, Disney Infinity, one of the largest toys-to-life brands, left the market, and it now seems the toys-to-life category will begin to stagnate. Despite this, while toys-to-life products are beginning to fade, demand for interactive toys remains; this likely means that there will be more room for other areas of traditional toys to fill this demand, in particular remote control toys.

Remote control toys is expected to be one of the few traditional toy categories to see year-on-year growth accelerate over time; in 2020, it looks set to see the highest growth of any category globally, with 5% constant value sales growth on the previous year.

Science, technology, engineering, arts, and mathematics (STEAM) toys has been a high growth area for some time now, as parents want to take a more active role in their children's education and give them a leg up in important areas of  learning.

Technology is, however, becoming increasingly important for parents, especially in developed markets. In particular, computer coding has become very important as parents see that skill set as a path toward a high-quality career for their children. Between 2010 and 2015, the number of graduates in science programmes grew by 15% in developed markets, which was the fastest of any programme and was due in large part to an increase in computer science degrees. This is only expected to grow over time, and parents will likely increasingly see computer programming as an essential skill for their children, which will help maintain high yearly growth for STEAM toys. At the same time, however, growth momentum is expected to fall slightly for STEAM toys, and the addition of interactive elements similar to what is found in remote control toys may help put year-on-year growth back toward an upward trajectory.

LEGO BOOST attempts to bridge children's desire for highly interactive toys with the parental desire for educational playtime. This could point to a new way for interactive products, including robots and smart toys, to differentiate themselves from other non- education-focused interactive toys. Coding will likely be the primary area of focus for interactive smart toys, as this will continue to be a focus for parents, but other areas of STEAM could be explored. Mathematics would be an ideal candidate, as highly sophisticated robot toys, like Anki Cozmo, already come with a variety of simple games to play with the robot, and adding math elements would likely be simple. Should this hybrid of interactive and STEAM toys prove successful, it is likely that, just like toys- to-life, many more will enter the market. To avoid toys-to-life's current path of stagnation, toy makers in this space will need to work to keep children and parents engaged, offering new ways to both play and  learn.