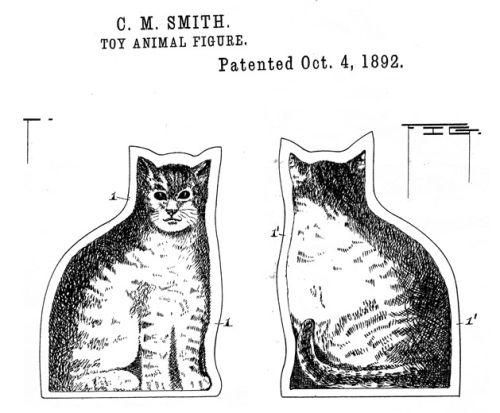 The "Ithaca Kitty" was the creation of Celia Smith, a denizen of Ithaca, New York. Living in the same home were her husband, her daughter and a cat with seven toes named Caesar Grimalkin. She felt inspired by her cat and created a stuffed cloth version based upon his likeness. She did not, however, include those seven toes. 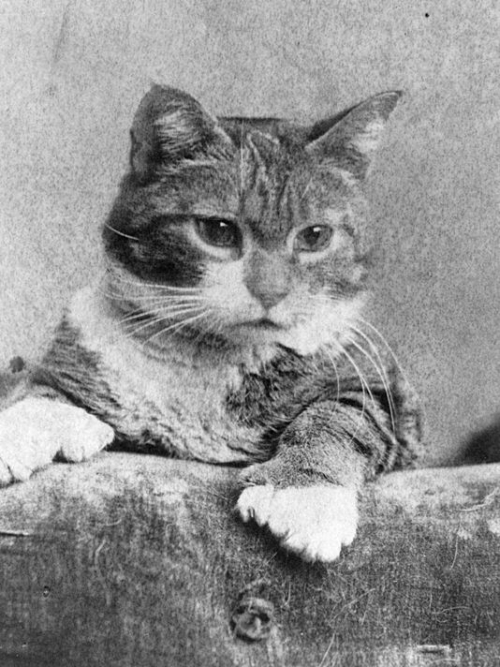 Her husband, William Hazlitt Smith, was an attorney and he felt strong enough about his wife's creation that he applied for a patent. Mr. Smith was smart to get that patent because the "Ithaca Kitty" took off, ending up in department stores, magazines, newspapers and even made it to the Chicago Worlds Fair. How well did it sell? Well, 200,000 Ithaca Kitties were sold during its first Christmas season. To give you a sense of proportion, the population of the United States was 50 million in 1880. Today its 318 million, more than six times as large.

Its seems that Grimalkin is a pre-modern English name for a cat (specifically a gray one). Cats named Grimalkin seem to show up in strange places.  Nostradamus, the great 16th century French prophet had a cat named Grimalkin. In the next century, Shakespeare (coincidentally?) included a cat name Gray-Malkin in his MacBeth. He was the property of the Three Witches and he assisted them in predicting the future. H.P. Lovecraft, the writer of horror stories mentions a grimalkinThe Dream-Quest of Unknown Kadath.

I do think, however, that there may be another reason for the name. As mentioned above, Celia Smith's husband was named William Hazlitt Smith. He was more than likely named for William Hazlitt, an 18th century author and critic who mentions Grimalkin in a piece he wrote for the Examiner in 1815.

Is that a clue to the cat's name? Was it Mr. Smith who named the cat in a bow to his namesake Hazlitt? Who knows but there is far more to the "Ithaca Kitty" than I thought.