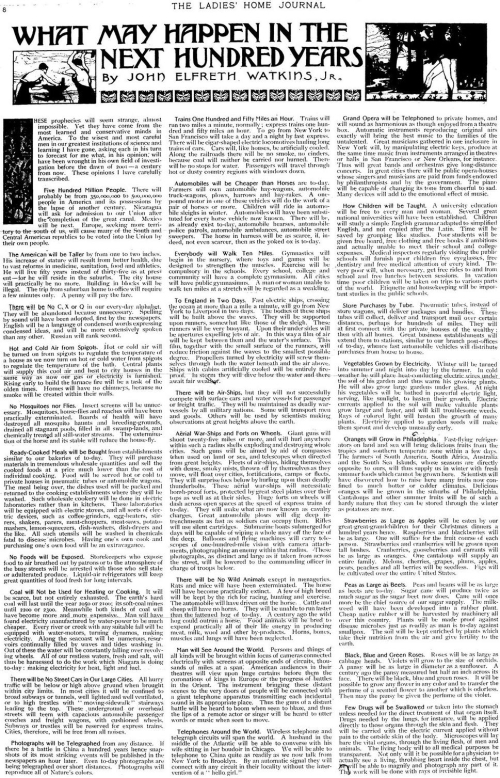 I publish a monthly "Toy and Play Industry Futurist Letter". I write it because I believe that forseeing the future is essential for better a understanding of what kinds of toys, marketing and packaging will be popular in three to five years.

I was, however, astonished to read this series of predictions for the year 2001 as presented in a 1901 Lady's Home Journal article written by John Elfreth Watkins Jr. Mr. Watkins did not claim that these were his forecasts. Rather he went to the "the wisest and most careful men in our greatest institutions of science and learning". He does not tell us who these men were but whoever they were some of them were pretty right on the money.

This is a blog that is about play so let's start with his prediction about toys: "Gymnastics will begin in the nursery, where toys and games will be designed to strengthen the muscles." Is this an accurate prediction? I think the answer is "kind of".

Here are some other predictions:

Most of the predictions were reasonable based upon what was known at the time.  Some are a bit absurd. I love this one: "Strawberries as large as apples will be eaten by our great great grandchildren for their Christmas dinners a hundred years hence. Raspberries and blackberries will be as large. One will suffice for the fruit course of each person. Strawberries and cranberries will be grown upon tall bushes. Cranberries, gooseberries and currants will be as large as oranges."

All in all, I think Mr. Watkins' "wisest and most careful men" did a pretty good job. Click here and read the entire list. What do you think of his predictions.