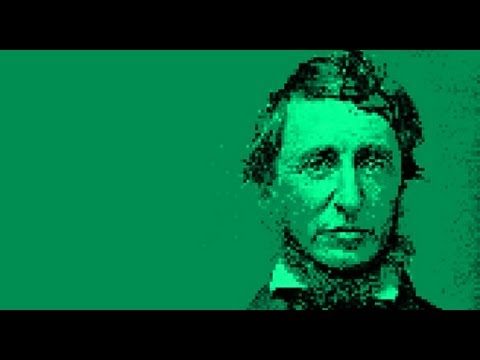 "It's not what you look at that matters, it's what you see."
Henry David Thoreau

A number of years ago, while visiting Boston on business, I took a half day to visit Walden Pond. As I left Boston in my rental car, I mused about the stress of the city and the tranquility that Henry David Thoreau promised me in his great book: Walden.

Thoreau's book was an accounting of his immersion in nature. His goal being to live more simply and become more self-reliant. It sounded good to me.

I spent a couple of  hours there, feeling tranquil and, as a sort of souvenir, picked up some pinecones to remind me of what it felt like to be at peace. The pinecones stayed on my dresser for many years. They did not, however, have the power to take me back to Walden.

It was with this in mind that I discovered this morning that Thoreau's book is being turned into a video game, Walden, a game, that will release this July in honor of his 200th birthday. It seems like a good time for a game that creates a sense of peace.

The game is, however, by no means a response to current events. As it turns out, it has been under development for ten years. The game is largely the creation of  Tracy J. Fullerton,  director of the Game Innovation Lab at the University of Southern California School of Cinematic Arts. Ms. Fullerton wanted to make the book and its worldview available to a new generation whose literacy encompasses video games.

What do you do in Walden, the Game?

Well, you don't shoot anybody, that's for sure. Rather, you do the things that Thoreau liked to do like reading and enjoying solitude, elements that are necessary for "winning", if there is such a thing in a game like this.

I intend to buy the game when it comes out. Who knows, perhaps I will find some virtual pinecones?