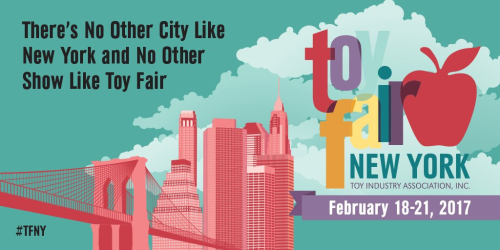 Without appointments, an exhibitor is dependent upon the stream of human traffic flowing down the aisles.

Toy Fair this year felt optimistic. Two good years in a row certainly helps and good weather was a big boost for industry veterans who have experienced major snow storms in past  years.

The show itself was, as usual, well managed and there was a lot of new, great looking product to see. I spoke to a lot of toy companies while at the show and despite the good weather and great new product, the question, "How was Toy Fair 2017?" elicited two kinds of responses:

One was that it was great and that they were booked solid with great appointments. This answer came from more established companies.

The other response was that they thought the show was slow. There was not enough floor traffic. This came from smaller companies and start ups.

Why the disparity? It is clear that Toy Fair, like all trade shows, simply attracts fewer attendees then in years past. Major retailers, in order to cut costs, send fewer buyers. Smaller retailers have shrunk in numbers over the years while alternative shows like the ASTRA Marketplace & Academy draw buyers away from the New York show. And lets not forget that New York City is an expensive place to stay so some choose not to attend in order to avoid the cost.

The key to Toy Fair is therefore, appointments. With appointments an exhibitor can count on having a pretty full schedule of meetings. In fact, two individuals told me that there is a growing feeling that there needs to be an additional day in order to handle all customers.

On the other hand, without appointments, an exhibitor is dependent upon the stream of human traffic flowing down the aisles. They are like fishermen standing on the shore of a river and hoping to catch a few, big fish. Its just that there are fewer fish swimming by.

If you are a smaller company or a startup, it is therefore important to have independent sales representatives in place who cover the country and who can arrange appointments in advance of the show. Yes, its important to have a great looking booth with great product well merchandised. In today's world, however, that's just not going to be enough.