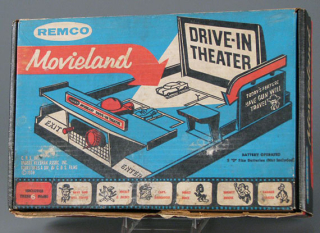 My favorite artifact in America at Play, an exhibit that opened on The Strong’s second floor in December 2016, isn’t the oldest, the biggest, or the showiest. But it’s one that transports me to another place and time. Which artifact has such magical powers? It’s the Remco Movieland Drive-In Theater play set from 1959. Today, drive-in movie theaters are almost unheard of, but the few that remain are considered a treasure. However, they weren’t always rare and exceptional.

In the 1960s, drive-in theaters occupied a significant part of the landscape of almost every suburb surrounding Columbus, Ohio, where I grew up. The concept had made its debut decades earlier—way back in 1933—when Richard Hollingshead opened his Park-In Theater in Camden, New Jersey. Hollingshead patented the concept and promoted his theater’s shows as cost-effective entertainment for the whole family since the price was 25 cents per car and 25 cents per person, with a maximum fee of $1. When Hollingshead’s patent was overturned in 1949, other entrepreneurs got into the business and drive-ins proliferated. At their peak in the mid-1950s to mid-1960s, drive-ins numbered about 4,000 coast-to-coast.

The Baby Boom era following World War II made a perfect demographic and economic fit with the drive-in theater. An increasing number of households had cars, kids, and the craving for a little entertainment without the expense of a traditional theater. Grownups appreciated the way drive-ins eliminated the need to pay for a babysitter—just pile the youngsters in their PJs into the backseat of the sedan or station wagon and hope they fell asleep during the second show of the double feature. Teenagers, in turn, found drive-ins the perfect destination for a date. I recall going to the drive-in only a couple time as a kid. Waiting for dusk to fall on a summer evening so the movie could start meant keeping my sister and me up past our usual bedtimes. Plus, I was never inclined to fall asleep at the appointed time anyway—let alone when a giant screen stood straight in front of our car’s windshield. Drive-ins typically showed Hollywood B-movies or second runs of popular theatrical releases, so the films were a little less than ideal. And I remember that the audio coming through the clunky metal speaker perched on my dad’s window sounded tiny—hardly the Dolby stereo that would become the standard in theaters a few years later.

I hadn’t thought much about drive-ins lately until I encountered the Remco play set in the museum’s collections. I decided it would be the perfect companion for a ranch-style dollhouse I was planning to include in the 1946–1965 case in the America at Play exhibit. The Movieland Drive-In Theater features toy cars you can line up in rows of parking spaces, and it actually shows movies—well, it shows film strips that are illuminated by a battery-powered bulb—of such classics as Mighty Mouse, Captain Kangaroo, and Have Gun Will Travel.

Drive-ins ultimately met their demise thanks to the rising real estate prices that made a seasonal outdoor movie theater that required acres of space a less compelling business proposition. Today, fewer than 400 drive-in theaters continue to operate in the United States, but I’m glad that a drive-in toy in America at Play gave me the opportunity to revisit my memories and to share a passing piece of American history and the entertainment business with new generations.