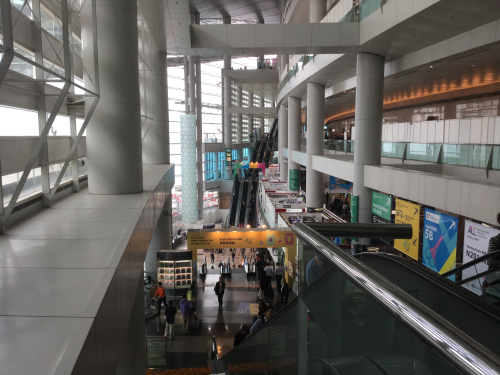 Lots of escalators at the vast Hong Kong Convention Center

There is a sense that we don't know where the industry is headed due to political forces beyond the control of people who just want to sell toy robots, dolls and action figures.

I always find coming to the Hong KongToys & Games Fair in January to be the most interesting moment in the toy industry's year. Due to the timing and place, it provides a closure to the prior year and a glimpse at whats to come.

The show is busy with heavily trafficked aisles full of serious faces intent on finding the new and rejuvenating the old. What is missing, and this may sound odd, are those typically ubiquitous, clumsy and cute costume characters.. If I pay attention to "Freakenomics" it tells me that it is a sign that exhibitors are being more cautious in their spending this year. Perhaps in times of uncertainty it is best to forgo a few frills.

There is much to be seen including the new, the unique and the (being polite here) "copy".  I did, however, see a couple of items that caught my eye. One was a box and the other a very smart telescope.

First, the box. Airypack makes a box that is 30 percent lighter than traditional boxes. It costs less to ship and is of course much lighter to carry. I think it would be an interesting way to package toys as well as utilize the material in making anything from puzzles to games.

The telescope I to which I referred is from Eastcolight.  By attaching your mobile device to the eyepiece, you can use an app to locate the star or planet you want to see and it will direct you there. It also can do an overlay of the object at which you are looking and tell you all about it. Its one of the best uses of augmented reality I have seen.

I am sensing, however, a certain uneasiness in the air.

Yes, 2016 was good and most people think that 2017 will be, maybe not quite as good, but good enough. But yet…but yet...there is a sense that we don't know where the industry is headed due to political forces beyond the control of people who just want to sell toy robots, dolls and action figures.

People with whom I have spoken tell me that there has been some mild upward pressure on prices due to higher costs of corrugate and petroleum but they are mild and being batted back. Prices should hold steady.

One final note about being in Hong Kong and that is the pleasure of and the insights coming from being with old friends and making new ones. There is nothing like an American joining friends from Poland and Italy to go out and eat Chinese food.

If you're not here, I hope to see you here next year. Its a great place to be.