The Strong’s board game collection is unique in all the world. Unlike specialized collectors, the museum thinks broadly about what it acquires, striving to represent both ancient and modern examples, simple games and complex ones, and extremely typical editions and rare versions for the varieties of play they represent, as well as the cultures that inspired them. So I was delighted earlier this year when Don Lyon of Binghamton, New York, offered the museum the opportunity to select from his collection of board games dating from about 1950 to 2000. I ultimately chose more than 75 games from a much larger list. The donation helps fill gaps in the collection for that era, and it also includes several treasures. 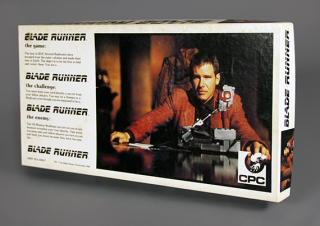 One game that stands out in the collection is a 1982 board game inspired by Ridley Scott’s Blade Runner. Blade Runner was not officially licensed through its namesake film’s producers. Therefore, due to copyright and trademark law, the board game was pulled from store shelves soon after introduction, making it nearly impossible to find today. Meanwhile, Blade Runner’s ever increasing cult status—it led the way for so-called neo noir films and helped create the science fiction tech noir genre—has made the scarce board game even more desirable over the years.

“Weird” means “collectible” for Transogram’s 1965 children’s game Green Ghost. Based on the success of creepy cartoons such as Charles Addams’ The Addams Family and its spin-off television series, the Green Ghost game is more fun than ferocious. It was marketed as the first glow-in-the-dark game, meant to be played with lights off. Though basically a simple race game with a glowing ghostly blob for a spinner and some other clever twists, the Green Ghost’s “children” pawns can cause ghoulish giggles.   While the game’s winner is the player who finds ghostly son Kelly, the other ghost kids are also named Olive, Emerald, Lime, Chartreuse, Jade, Bottle, Nile, Mist, Ever, Forest, and Billious (Bill.) Yeah, they’re all GREEN. And for creepy collectors, there is a website selling vintage games and spare parts for every Green Ghost component. Not to be missed. Adventure films like the Indiana Jones series helped inspire another children’s board game, 1993’s It from the Pit. Once an adult assembles the game, a motorized mechanism turns an ordinary race game into a fast-paced battle. Players must hurry to roll the die before “It” raises a giant claw and grabs their pawns right off the game board. Reviewers agree the game is clever and amusing, and recently, adult gamers recommended It from the Pit as a quick and light-hearted break between serious games.

The Strong’s collections benefit from the collecting prowess and generosity of individuals such as Mr. Lyon. Today many critics call Blade Runner the best science fiction film of all time, and the museum is fortunate to hold one of the few copies of the unofficial board game. And if you encounter a copy of the Green Ghost game, be warned that the kid-safe non-toxic chemicals that made some parts glow can also cause the plastic to deteriorate, so check the condition before you add it to your own collection. Finally, if you want to liven up any gathering of unsuspecting friends, unleash It from the Pit—just one more example from a great group of board games that found their way to The Strong.

For more on toys, games, and all sorts of other stuff for play—past and present—from Nic and his museum colleagues, visit The Strong's Play Stuff Blog