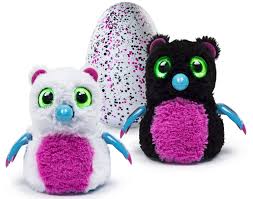 Spin Master has proven itself to be a great company.  Being a great company, however, does not make you immune to the agony and ecstasy of trying to manage a runaway fad.

Hatchimals has been the Cabbage Patch Dolls, Hula Hoop and Pet Rock of 2016. The cute creatures have been almost impossible to find with long lines awaiting phantom deliveries at various retailers around the country.

Spin Master has done all it can to get product in the hands of Hatchimal loving parents and children. They have airfreighted goods and dramatically increased production. As you would expect, however, the chaos of trying to catch lightning in a bottle can lead to breakdowns in quality control. There are complaints that some Hatchimals simply don't hatch, making kids crazy and their parents crazier.

In addition, there are also complaints that Hatchimals curse.

Note this headline from Fortune Magazine: "Did These Hatchimals Just Drop the F-Bomb in Front of Little Kids?" Well, of course they didn't. They speak a gobbledy gook, pretend language. It seems that frequently, when something is fun and innocent, there are those who want to see the devil in it.

Spin Master will be fine as will Hatchimals and the children who love them. After all, the famed Teddy Ruxpin had a big defective rate the year it took off. Nobody remembers that now. I suspect it will be the same with Hatchimals.