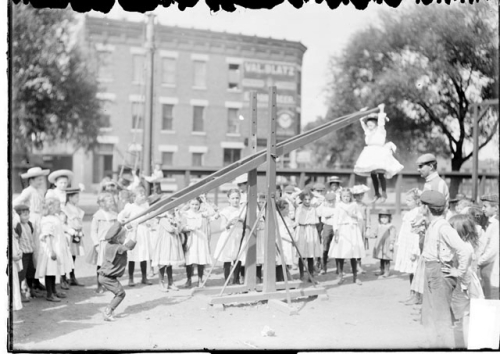 Seesaws, Teeter Totters or whatever you call them are disappearing from parks all across the country. That is according to a New York Times article by Sharon Ottoman entitled: "The Downward Slide of the Seesaw".

The article laments the loss, as Ottoman informs us: "…the seesaws adults remember have largely vanished from the city and much of the nation because of safety concerns and changing tastes." Are they really that dangerous?

I think we need to consider the seesaw as an endangered species in the same way that we do the "Cross River Gorilla" or the "Javan Rhino". Why, because they are important to childhood as they are part of our culture, fun and teach children about the inequities of life.

1.    Seesaws have been around for a quite a while but for how long is uncertain. The name, interestingly may have two sources: The name may imitate the sound of a saw going back and forth or it may be an English version of the French words "Ci-Ca" which mean "this-that".  Teeter Totter comes from the Scandinavian word "tittermatorter". Both terms were in use in England during the 16th century so the early colonists probably brought the seesaw with them.

2.    Seesaws are a great deal of fun and a little bit scary (depending on how young you are and how high you go). Children love the honor that comes with overcoming a fearful pursuit. I can still remembering as a child watching a boy riding the seesaw without holding on. He seemed pretty brave to me.

3.    Seesaws also teach us about balance and the lack of it, both physically and societally. Depending upon how big your partner is can tell you a lot about power inequities, particularly if they have popped you up into the air and won't let you down.

I think we need to stop the disappearance of a play pattern that we have been enjoying for hundreds if not thousands of years. What do you think?