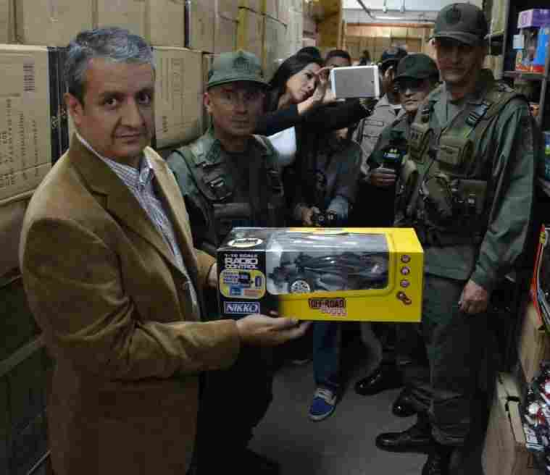 Venezuelan toy distributor, Kreisel, had its warehouses raided this week by Venezuelan governmental officials. They confiscated 4 Million toys and then turned around and announced that they planned to give them away free to Venezuelan children.

The raid arose from charges by the government that the company was hoarding toys. Why were they hoarding toys? The government alleges that they were doing so in order to take advantage of Venezuela's rampant inflation. In other words, hold on to them and then, I am assuming, sell them just before Christmas and Three Kings Day.

I think we should all be concerned about this as it effects one of the global toy family. It is like the US government raiding Hasbro or Mattel and confiscating all of their toys. No Kreisel is not a Mattel or Hasbro but they are a large, respected distributor covering much of South America. Located in Caracas, the company carries products from Spin Master, Giochi Preziosil MGA, Nikko and others.

The economic situation in Venezuela is dire with scarcities of food and medications. The New York Times ran this headline: "Hungry Venezuelans Flee in Boats to Escape Economic Collapse".

People who can't afford the basics more than likely cannot afford brand name toys like those mentioned above. It would appear more than likely that Kreisel was warehousing these toys because they could not sell them.

Two executives from the company have been jailed and I doubt that Kreisel can overcome the loss of that many dollars in inventory.

One of the cornerstones of a successful economy is the rule of law and a respect for property rights. I hope that Kreisel is made good by a future Venezuelan government that remembers that capitalism works best when it is allowed to be free from the heavy hand of governmental interference.