Emerging markets, following a slowdown in traditional toy sales due to macroeconomic volatility, are expected to recover through 2020 and once again drive traditional toys and games growth globally. However, emerging market growth will differ based on the income and demographic trends of emerging countries, from growth markets like China that will have positive income and child demographic trends, to stalled markets like Brazil that face negative trends. While the macro environment in many emerging markets could remain unstable in the short to medium term, research detailed in the new report "The Shifting Dynamics of Traditional Toys in Emerging Markets" points to improving prospects in India, Sub-Saharan Africa, Russia and China in 2020-2030, as well as possible long term issues in the Brazilian market. 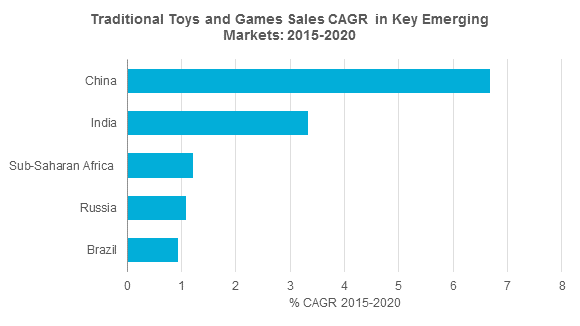 China is expected to see high growth in incomes over 2020, and the end of the one child policy could have a positive impact on child demographics. While a large amount of Chinese households will not have income levels high enough to support multi-child households, middle- and upper-income families, which are key toy buying households, will be able to. This growth however, will be short lived, and beyond 2020 birth rates will likely fall considerably in China, making the toy market in the country more dependent on income gains.

India and Sub-Saharan Africa both are relatively low income markets with substantial child populations. While both incomes and child populations are expected to grow through 2020, discretionary spending will still likely be low due to the large amount of the population with very low disposable incomes. Therefore, toy growth in these markets will largely be derived from the large base of children, and come from mostly low cost toys. Beyond 2020, however, demographic trends will continue to be positive, and income gains might have a more appreciable impact on toy sales. This is especially true for India, which will eventually reach levels of disposable incomes per household similar to China in 2010, which was the beginning of a period of high toy growth for the Chinese market.

Russia is in the midst of recovering from economic issues brought on by a drop in oil prices and an unstable geopolitical outlook. However the country's economy shows signs of stabilising, and incomes are subsequently on the rise again. This will be the core driver of toy growth through 2020, as new child births continue to heavily decline in the country despite government programs to entice families to have more children. Even with a recovering economy through 2030, the child population is expected to continue to see steep declines, and the country will become even more wealth driven, relying on premium and licensed toy purchases to sustain growth.

Brazil has faced a variety of issues that have slowed its traditional toy growth. Political instability and macroeconomic volatility has negatively impacted income growth and the threat of the Zika virus has caused many families to delay having children until they can be assured it is safe. These issues have negatively impacted traditional toy growth and are further exacerbated by the country's heavy import levies. While the economic issues are expected to stabilise, the child population is not expected to see major growth, and should the Latin America region as a whole experience a period of stagnation, Brazil could see further income declines that would have a major negative impact on traditional toy spending.