Having grown up with dogs, cats, a rabbit, and the occasional fish or two, naturally I consider myself an animal lover. Like many folks who fall into this category, my love of creatures is not limited to domestic varieties, but extends well beyond to animals of sea, sky, and land, particularly exotic animals such as giraffes and elephants. When I planned my outdoor wedding, I mused how fabulous it would be to have a giraffe meandering about the large, wooded yard—perhaps just a calf to ensure it fit the space appropriately. Needless to say, that idea did not come to fruition (my mother was not amused), but I did have the opportunity to meet and feed a charming giraffe named Oliver in the days leading up to the event. 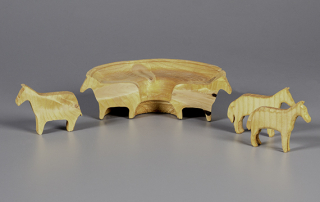 The fascination with exotic animals is not new; for generations people have enjoyed animal-themed toys and play sets, many examples of which can be seen in The Strong’s Play Pals exhibit.  Early Noah’s Ark sets contained an array of wooden animals, no doubt a time-consuming process when it involved carving each animal one at a time, so a new tactic was devised. Using a lathe, a craftsman could create a silhouette of each animal in a ring shape, and then simply slice off pieces with ease to result in consistent design, dimension, and quality. I first saw one of these shaped rings a few years ago when I joined the Collections Team at The Strong, but find that I am still impressed each and every time I look at this unique (and efficient!) approach. In the early 20th century, fascination with the circus swept across America, a trend that was not missed by Philadelphia toy maker A. Schoenhut. The A. Schoenhut Company immediately went to work and presented consumers with the Humpty Dumpty Circus toy line, featuring 10 star performers, more than 30 different animals, and a wide variety of accessories ranging from chairs and ladders to elaborate, three-dimensional canvas tents. The line was a tremendous success, and it’s easy to understand why when looking at the charming hand-painted animals with jointed limbs and cloth details (I’m partial to the elephants). Other similar sets, such as Barnum’s Great Menagerie, proved quite popular as well. For fellow enthusiasts who preferred a single variation of their favorite animal, German toy creator Margaret Steiff offered a wonderful array of animals in numerous shapes and sizes, such as an elephant rocker, complete with red blanket and saddle. The longevity of zoos as part of our culture speaks to the popularity and fascination people have with animals of all sorts. Zoos afford us the opportunity to see beloved animals in person, an opportunity many of us may not have otherwise had. In a single day, zoo-goers can see penguins at play, watch a hippo having a bath, and admire an elephant enjoying the sunshine. A few visitors may even pique the interest of a majestic lion, finding themselves nose to nose through the glass, curiously eyeing one another.

So while not everyone envisions a giraffe taking a lengthy stroll through the backyard or has the space to accommodate elaborate circus or menagerie play sets, chances are that whether it’s tall or small, you’ve likely got a favorite animal or two. I find it difficult to choose—maybe I’ll discuss the matter with Oliver the giraffe over a snack of carrots the next time I visit.

For more on toys, games, and all sorts of other stuff for play—past and present—from Victoria and her museum colleagues, visit The Strong's Play Stuff Blog