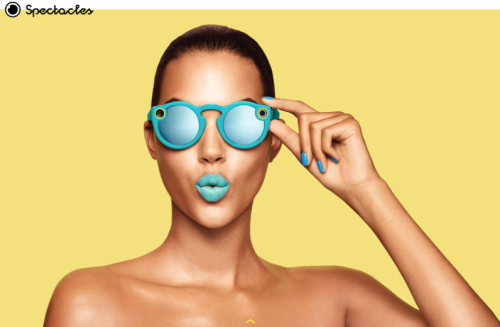 "One of the most compelling new gadgets to be released by a major technology company in years."

Snapchat, the social network of choice for teens and young adults, has gone into the consumer products business. The company is selling camera sunglasses, they call them Spectacles, that shoot video in 10 second bursts, perfect for Snapchat.

Here is what fascinates me:

1.    They are only being sold in randomly placed, pop-up  vending machines.

If they sounds like the ill-fated Google Glass, there is a similarity. After all, they both included a camera. The difference, however,  is that these are cool sunglasses and they retail for $130 unlike Google Glass which launched at $1500.

So what is the story here? People waiting in line for 18 hours? A digital company creating a stand alone consumer product that works with their app?  The use of vending machines? A new way to memorialize your life? A groundbreaking business model?

All of that and probably more. That is why I think what Snapchat is doing is important to all of us.

Snapchat, if you will recall, allows users to post short videos and images that self-destruct right after someone views them. Teens and young adults love Snapchat and these glasses will allow them to easily and effectively create content.

How good are they? Here is what Farad Manjoo of the New York Times has to say:

"Whatever your head shape, if you are lucky enough to find some Spectacles this season, you will be getting your eyes behind one of the most compelling new gadgets to be released by a major technology company in years."

In his article on the glasses, "Trying Snap’s Spectacles: Live With the Look, Enjoy the View", Manjoo points out that they create an intimacy that is not possible when filming through a phone. Let's face it, when you place a camera or cell phone over your face you are out of the picture. (By the way, I wonder how many toddlers think their adoring, picture taking parents's faces are cell phones). That's different with Snap Spectacles. Here is how Manjoo describes the effect:

"[Snap] Spectacles collapse that distance. You can snap a memorable moment without ever leaving the moment…It’s not just that Specs let you remain in the moment. When you play back what you captured from the glasses, you return to the moment more easily. The images…are deeper, more real and more emotionally evocative than most other snapshots… When you take a picture with a camera, you are usually cropping an ideal shot that bears little resemblance to what you actually saw… Because you just shoot what you see, the images seem to jog deeper memories about what happened when you were there.

I see them as a toy for adults and see them and their business model having an impact beyond the moment. Let's pay attention to this. It bears watching.