Unless you have been out of touch for several days—say, locked in an epic game of Dungeons & Dragons—you have probably heard that Little People, the tiny figures that accompany Fisher-Price play sets, played a big role in the induction announcement of The Strong’s National Toy Hall of Fame on November 10. Little People, along with the game Dungeons & Dragons and the swing, took their place of honor among 59 previously inducted toys. 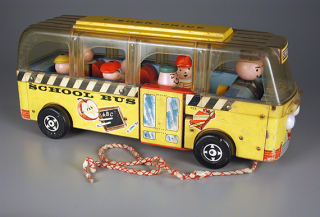 First introduced in 1959 as the removable passengers in the Safety School Bus pull toy, Little People have helped small children imagine big adventures ever since. Fisher-Price made the first Little People out of wood, but the figures have been molded out of plastic since the 1960s. The shape of Little People has changed over time too. The first figures were mostly cylindrical and grew wider as issues of toy safety arose in the 1980s. Then, when the figures were redesigned in 1997, they appeared with arms and legs and more colorful, three-dimensional faces. Over the years, Little People accompanied play sets that encouraged youngsters to explore the world beyond their homes and to imagine themselves at school or the airport, at the service station or the amusement park, and at the zoo or on the farm. Fisher-Price offered scores of play sets over the years, but children of successive generations remember the Little People in the sets best. The figures often became detached from their miniature buildings and vehicles, but the separation did not lessen the play value. Tucked in a small pocket for safe keeping or secured in a secret hiding place in the playroom, the Little People took on a life and purpose far removed from the make-believe play Fisher-Price initially intended. Since the first small figures have appeared, more than two billion Little People figures have been sold in 60 countries. In 2013, Fisher-Price developed personalities and back stories for its traditional Little People, literally taking the figures from the hands of children and placing them in web episodes, a television series, and live-performance events at zoos, on cruises, and in other venues. No doubt, children will follow the stories of their teeny playmates on television and elsewhere, but like the generations before them, they will continue to voice their own Little People tales from their very own imaginations.

For more on toys, games, and all sorts of other stuff for play—past and present—from Patricia  and her museum colleagues, visit The Strong's Play Stuff Blog