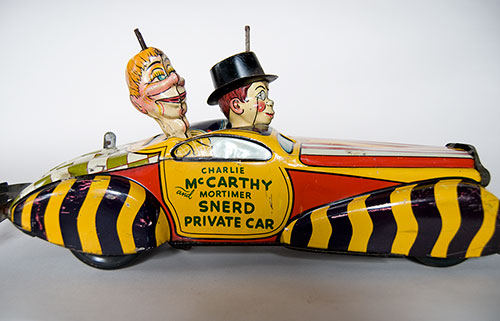 Wind-Up cars were the high tech toys of their time. If you were a little kid, you weren't sure how winding that key made the car go. Your parents warned you not to overwind but you inevitably did anyway.  Here are some cars I picked out because I liked the way they looked.

The Charlie McCarthy and Mortimer Snerd characters are mostly unknown today but they were a big deal in the mid-20th century. Created by Edgar Bergan (Candace's father) they were popular figures. The above car has kept its beautiful finish allowing us to see what it looked like on Christmas morning in 1939.

The above race car appears to be running on Pirelli Supeflex tires. That little touch adds some authenticity to what was probably a, at the time, recognizable driver and car. 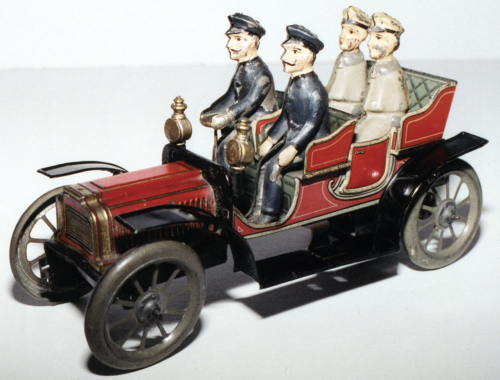 The above open body cars must have provided a cold ride in the winter for those ladies but they were obviously a sign of luxury.  Note that the chauffeur has an assistant.

I guess you can't get much more made in American than a company named for and located in Buffalo, New York. Land Speed Racers were cars that were designed to break records. Apparently the Buffalo Toy & Tool works thought kids would love this red miniature version. I bet they did.