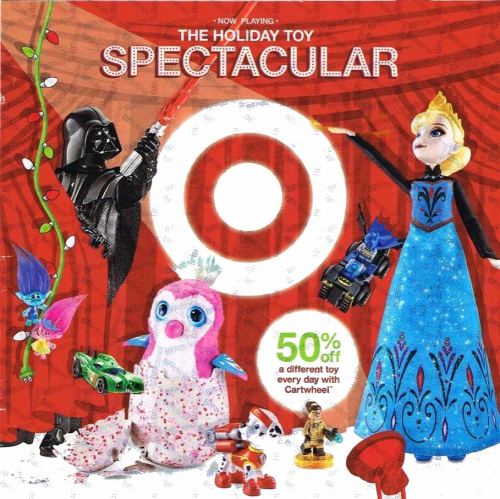 I did a series of gender critiques of retailer Christmas toy catalogs in 2011. Its been five years since then and I thought it would be interesting to review this year's editions and see what has changed.

For this article, I have chosen to look at Target's "Holiday Toy Spectacular" in comparison to what I wrote in 2011, "The 2011 Target Toy Catalog; a gender critique".

In 2011 I wrote: "I did my due diligence and was unable to find any depictions girls and boys together in ride on vehicles.  I did, however, count all the forms of vehicles depicted (a total of 15) and found that 12 were ridden by boys and 3 by girls.  Apparently, boys do most of the riding in this country."

A review of the 2016 edition on page 69 shows that there are only five cars depicted. One does not have a child driver but the other four do. Two are girls and two are boys. The 2011 catalog presented boys as driving 80% of the vehicles. This time the split was 50 / 50. Now that's gender equity.

In 2011 I wrote: "The catalog depicted 8 toys that I would characterize as aggressive (a Thor Hammer, a rifle, etc.) and all depicted boys playing with them.  This was not surprising.  What was surprising, however, was that of the 3 musical items depicted, all were played by boys.  Aren’t girls rock stars too?"

In this year's 2016 catalog I found ten images of aggressive toys and again all were pictured with boys (pages 4,25, 26, 22, 28, 29 and 30). So, nothing has changed there. As to the musical instruments, that was a challenge. The child singing into a microphone on page 10 appears to be a boy but with the long hair I can't be sure. There is, however, a girl on page 58 playing a guitar. The girl on page 12 snapping her fingers to the music does appear to be a rock star. So, with music, we have moved to more of a balance in gender.

In 2011 I wrote: "The girls section, as we have come to expect, only depicted girls.  I guess you still can't put a boy in there with all of those dolls, cooking sets and books."

I reviewed the girls' section in the 2016 catalog(pages 44 – 61) and there were again no boys depicted. Oddly, the Crayola page, which I consider to be gender neutral, took up all of page 56 and was therefore right in the middle of the girls section.

In 2011 I wrote: "Not surprisingly the construction toys pages featured boys.  No girls allowed!"

In 2011 I wrote: "One refreshing note, however, was that the technology area looks pretty gender free with lots of boys and girls.  Technology is new school compared to toys so perhaps that is why the stereotypical gender reflex is missing."

I checked the 2016 catalog and nothing has changed there and that segment continues to be gender neutral.

I didn't comment on it in 2011 but one of the areas that lacked girls in most catalogs was wheeled goods (scooters, bicycles, hover boards, etc.). The 2016 catalog presents (pages 4, 5, 68 and 69) an equal number of boys and girls.

Over all, the gender presentation in the Target catalog has become far more neutral. Next up: Toys R Us.