While 2016 was supposed to see the beginning of a virtual reality (VR) revolution with the release of the Oculus Rift and HTC Vive early in the year, so far the market has been confined to enthusiasts who are willing to spend on the expensive headsets and even more expensive computers needed to run them. On 13 October 2016, however, the PlayStation VR headset launches, and it will be compatible with PlayStation 4s already in households and noticeably cheaper than either the Vive or Rift. Sony may now have an opportunity to become the leader in consumer VR, but it will need to work quickly to solidify a strong position as computer-based VR is quickly making advancements in affordability and content. 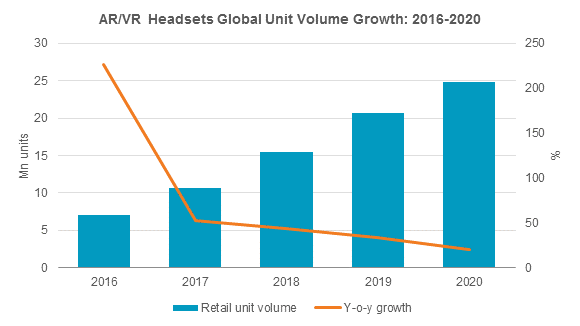 One of the key factors that will encourage sales of PlayStation VR is the number of PlayStation 4s that are already on the market. Between its launch in 2013 and 2015, the PlayStation 4 sold nearly 37 million units worldwide and, according to Sony, had sold over 40 million units by the end of May 2016, giving it a relatively strong foothold in households when compared to the number of high-end gaming PCs currently on the market that are capable of running VR. In addition, the PlayStation VR will be priced well under the other major non-mobile-based VR headsets on the market, at nearly  half the price in some markets.

In addition to the pricing and install base advantages the PlayStation VR base will  enjoy, content as well as the accessibility of that content could work to the benefit of the new headset. Sony works with and owns a variety of game developers for PlayStation 4 games and plans to leverage this for PlayStation VR, which intends to  have nearly 50 games released for the system between launch and the end of the   year, and, according to the company, has 230 development studios working on games that will work on the PlayStation VR. In addition to this, the PlayStation 4 has increasingly become more functional for digital distribution, with larger hard drives being released for the PlayStation Slim and PlayStation 4 Pro. This will likely prove useful for the PlayStation VR, which will need to quickly and effectively release    content in order for consumers to justify their purchase. In addition, many PlayStation VR games will be shorter in length and lower in price than traditional console games, which will further benefit from digital distribution, which historically has been used for smaller purchases, like extra downloadable content (DLC) for games.

Sony has an opportunity to establish itself as a major player within VR headsets and quite possibly the leading player in premium non-mobile VR. The overall AR/VR headset market is expected to see unit volumes grow by 254% between 2016 and 2020, reaching retail sales of 25 million units and USD4.9 billion by 2020, so establishing an early lead could greatly benefit Sony. However, the company will only have limited  time to create a major install base foothold, as its pricing advantage over computer- based competition is set to rapidly diminish. Oculus recently announced that it has  been able to bring down the minimum specifications for computers to use its VR headsets, and now computers that cost USD500 are expected to be able to use the Oculus Rift, down from the previous minimum price of nearly USD1,500. Add to that a swift expected decline in the cost of other VR headsets as manufacturing capabilities improve, and Sony will not be able to afford many missteps if it wants the PlayStation VR to be the headset that first brings premium VR to mainstream audiences.