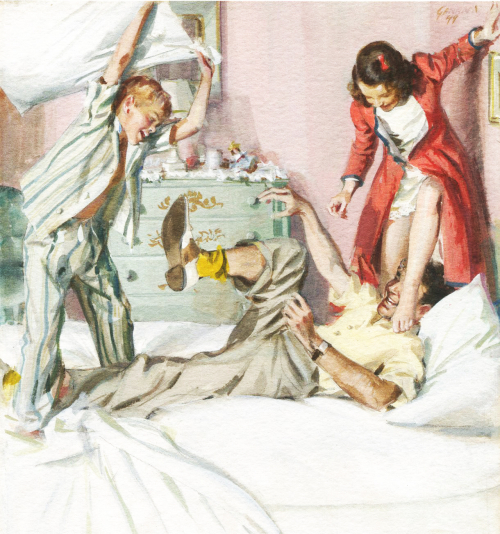 Roughhousing in Bed by John Gannam

I have a very good friend who used to love roughhousing with his five year old son. The father was not a particularly macho guy, in fact, if you had known him,  you would have described him as sweet and gentle. Still, he loved to play elephant with the boy, rocking back and forth with his child on his back, making an elephant sound and generally making a wonderful fool out of himself.

I would sit on the couch and watch the son giggle endlessly as he tried to hold on. The father was careful so his son didn't fall of but still it was a rough ride. The boy's mother, no fan of rough play, didn't like elephant. She thought it was too rough and suggested that the father read the boy a storybook instead.

Was roughhousing good or bad? That went through my mind as I read several articles sent to me by a friend about the importance of roughhousing. Now let me say here that roughhousing is not a toy but a way to play with a toy. For example, a ball can be used in many way. It can be tossed gently back and forth or used as a missile to flatten an opponent in "Dodge Ball".

One of the articles was a review of a book nicely titled "The Art of Roughhousing". According to the authors, Anthony T. DeBenedet, MD and Lawrence J. Cohen, roughhousing is good for a child. I read an article about the book on PsychCentral. Written by Therese Borchard and entitled "6 Benefits of Roughhousing", the article does a nice job of summarizing what the book has to say about rough play.

I am undecided about whether it is a good thing or not. I would, however, like to hear what you think. In order to help you process the pluses and minuses, here are what Ms. Borchard paraphrases as the six benefits:

1.    It makes a child more intelligent

Yes, I know it it hard to believe that roughhousing makes you smarter but there is science at hand to prove it. As Ms. Borchard puts it: Roughhousing "…releases a chemical called brain-derived neurotrophic factor (BDNF) which really is like fertilizer for our brains. Roughhousing stimulates neuron growth within the cortex and hippocampus regions of the brain, responsible for memory, learning, language, and logic."

It seems that, when as a child, anticipating what will happen to you if you hit a child bigger than you are and thereby choosing not to do so has benefits. And what are the benefits? You learn how to anticipate what will happen if you make your boss feel stupid in front of a crowd or your spouse belittled at a dinner party. In short you need to read situations, people and the room.

3,    It makes a child more congenial

When I read this I thought about how puppies like to chase each other around the yard, biting and wrestling. Maybe kids are a bit like puppies in their need to engage each other physically as a way to get to know each other and to achieve intimacy. Ms. Borchard cites a number of friendship building benefits like the ability to  "distinguish between innocent play and aggression". She also states that it teaches "…the concept of leadership and negotiation".

4.    It teaches children, older siblings and parent important lessons in morality and ethics

This one applies more to parents and older siblings as it teaches them to hold back. They are bigger so they have a moral responsibility to not use overwhelming strength to win. An adult could, for example, throw a fastball, striking the child out thus teaching them to avoid baseball. Morality dictates, however, that the adult needs to throw softly and across the plate to give the child a chance to develop his or her hitting skills. It makes them better and they learn to love the game.

Watch a child wrestling around with a parent and you will hear a lot of laughing and see a lot of determination. It is physical, it is emotional and it is fun.

Do you or did you roughhouse with your parents or children? Let us know your thoughts.