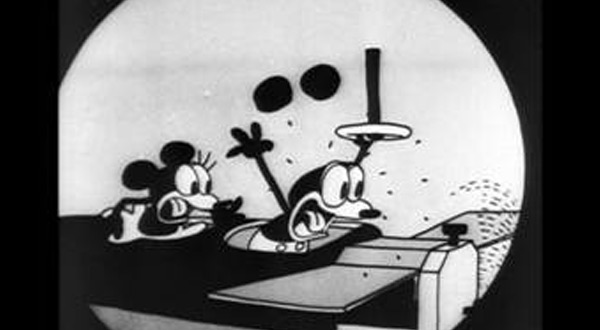 The above image is from the first Mickey Mouse feature, Plane Crazy. The cartoon was created by Walt Disney and Ub Iwerks and was released in 1928. When I watch the cartoon, what first strikes me is the realization that Walt and Ub were only twenty-seven years old at the time. That makes this the work of young, virile men who are feeling their oats.

This is the work of a very different Walt Disney then the one we came to know. Simply put; it is a lot funnier. Note how Mickey's ears pop off from fear. Its cute and hilarious. Also that Mickey and Minnie are far looser, more frenetic and crazier than what came later when Mickey and Minnie became staid citizens of cartoon land. See for yourself and watch the show (see below):

Then take a look (below) as Mickey Mouse aggressively flirts with young Minnie. What we are seeing here is a testosterone fueled Mickey Mouse.  This Minnie Mouse is different as well. She appears obviously smitten and very much liking whatever it is Mickey is selling. She is, however, no pushover and later slaps an overly aggressive Mickey when he tries to force a kiss on her. Another difference is that the Disney work we know is unmoored from the world in which we live. This Mickey Mouse story, however, is ripped from the headlines. Lindbergh had just flown the Atlantic the year before and was busy romancing Anne Morrow who was to become his wife. Thus, we may have Lindbergh to thank for inspiring Walt Disney to create Mickey Mouse. Bottom line, I much prefer this version of Mickey and Minnie Mouse. They make me laugh.