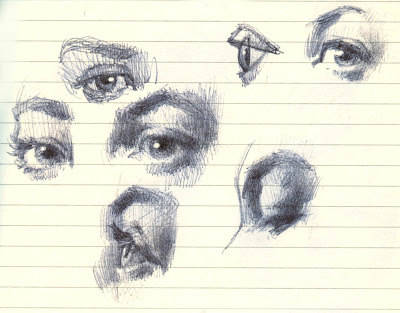 I caught up on practice sketching during my latest flight to China. It was a long, long flight, so in-between refining toy designs, answering emails and watching the horrible Batman vs. Superman: Dawn of Justice in-flight movie, I did one anatomical sketch after the other.

Eyes are the most important part of any commercial or fine art sketch—they are the gateway to the soul. If you nail the eyes in your sketch the rest of the image usually hits the mark and if you don’t, then not so much.

So, why are eyes so important? Well, eyes don’t lie like smiles do. Handshakes are meaningless and words can’t be trusted in this day and age. Yes, eyes reveal the inner person—who they really are—the very essence of their true character.

I’ve known some extremely successful people who are filthy rich and envied by those who seek the same, but their eyes are empty, drained of life and any hint of a living soul. Their smiles, that is, the ones they use during meetings with special clients, are a mere facade to distract from the truth hidden deep within their eyes.

In my personal life, beyond toy design, I have served as a volunteer chaplain at a maximum-security prison for well over twenty-five years now. It is safe to say I’ve seen a lot—too much to be honest with you and I know my eyes reveal that.

If you were to look into my eyes, you would see a loss of innocence I will never get back. Walking cell to cell, I have experienced evil first hand and can never return to living a candy coated life thinking all is well in the world around me.

I’ve been in prison riots, held a man as he shook and cried uncontrollably because he was raped the night before, and saw a murdered inmate lying on the ground staring toward the sky never realizing when he woke up that morning it was to be his last day. Yes, I can honestly say without being overly dramatic, I’ve seen too much and I will never get the innocence of my early years back.

My mentor, an African American chaplain, taught me how to keep from getting killed doing this sort of ministry—by not trusting anything but what you see in the eyes. Eyes are bitterly honest and betray even the best liar if you look hard enough. This not only works in the deepest recesses of a maximum security prison but also within corporate America.

If you clear your mind eyes will tell you the real story. Once you learn to see the real person, the true nature hidden behind the carefully constructed image, you too will lose a sense of innocence, because the cold-hearted reality of what is hidden deep within the human nature is sobering.

The sales of anti-depressant medications are at record levels, even with those who are earning high levels of income, drive fancy cars and own the big house on the hill. It seems money and power cannot infuse life into a person’s eyes, and they remain inmates of their own carefully constructed prisons.

But then there are those who have glowing eyes—eyes filled with life. They are easier to notice because they are so rare, but when you do encounter one of them it is hard not be affected in a positive way.

These people come in many colors and economic backgrounds, but seem to have one thing in common—they all have weak grips on areas of life the rest of us firmly hold on to.

They don’t harbor ill feelings toward those who mistreat them; they simply let go of the anger and choose to move forward. They don’t spend their time setting traps or planning corporate power plays, but instead, focus on doing positive things within their realm of influence. They concentrate on developing their unique gifts and do what they love to do—what they were born to do. As a result—dare I say it—they actually find happiness.

The most difficult eyes I have ever had to look into are my own. Sometimes, even now, the daily cares of the world can steal the joy from them, dim the light if you will, but like so many others who inspire me, I try to make the conscience decision to have a weak grip.

I fail at times, but do my best to let go of the things this world tells me are important so my hands are free to hold onto the truly significant things that actually make a difference and, in turn, re-kindle my eyes to show signs of life.

The kingdom you carefully constructed for yourself won't last forever and your fancy new job title can’t hug you and tell you how much it loves you—but your family can. So, spend time with those you love and let them love you back—you deserve more hugs, you deserve true happiness.

Yes, yes, I know life is hard and very few people will lend you a helping hand—that is the cold reality of the world we live in. There are those, however, who do care and chose to use their lives to help others—not for show or tax right offs—but for the right reasons that cause their eyes to glow and, in turn, find the hidden secret to living a truly rich and prosperous life.

Did anyone ever say you have beautiful eyes? Well, you most certainly do. So, let your eyes shine by filling your heart with a renewed purpose and letting go of the things that drain your soul to live one day at a time focusing on what truly makes your heart glow.